The Blackhawk Warrior Wear Black Ops Boot (That’s a mouthful to say) is a waterproof breathable boot manufactured by Blackhawk. The boots have a running shoe feel to them that require little to no break in time. The Black ops boots are not your grandfathers boots and do not have any discomfort out of the box. 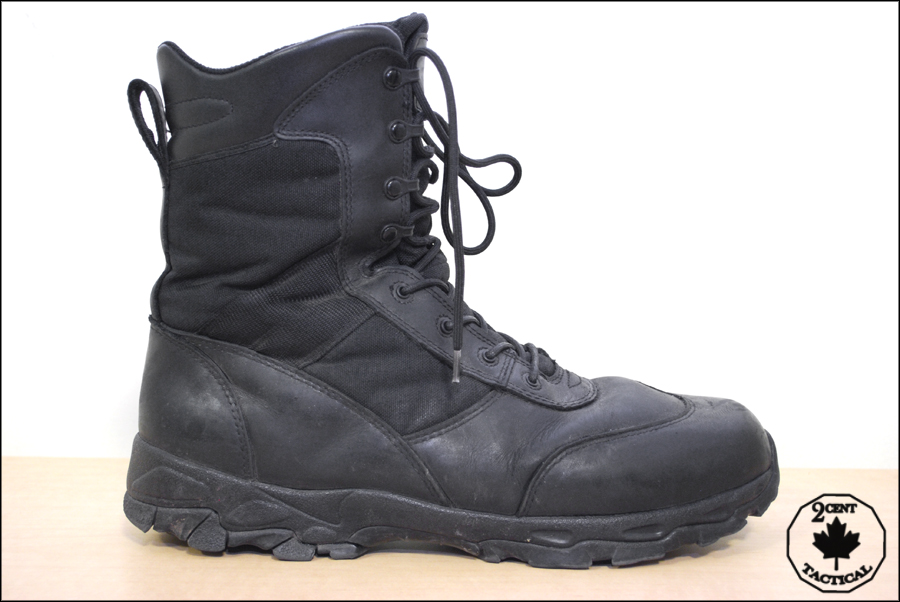 Cons
-A tag is on each side of the boot midway up that says waterproof.
-The toe areas leather reinforcement might not be Sergeant Major approved
-Heat will build up much like most waterproof boots if you wear in the dead of summer

Initial wear period
I opened the box and after removing the labels and the two tags on each side of the boot I popped my feet into my new boots. The first thing I noticed as I walked around the room were the insoles. My first point of business with almost any new boot is to rip the 3 cent insoles out that most companies toss in their boots. It has now been over a four months and I am still using the stock insoles despite having a brand new set of super feet waiting to be transplanted. The insoles that are in the boot are not what I would call expensive insoles but combined with the rest of the boot give it a running shoe feel. Over the past few months I have gone on ruck marches in brutal heat without issues. My feet were sweaty but no hot spots or blisters occurred. This is fairly impressive I tried to do the same in a set of Gortex Bates M9’s and the entire bottom of my foot practically fell off.

Materials
Starting at the base of the boot you will find a oil resistant Vibram outer sole. The outer sole provides excellent shock absorption as well as great grip on varying surfaces. The outer sole has a good range of flexibility while not compromising stability. 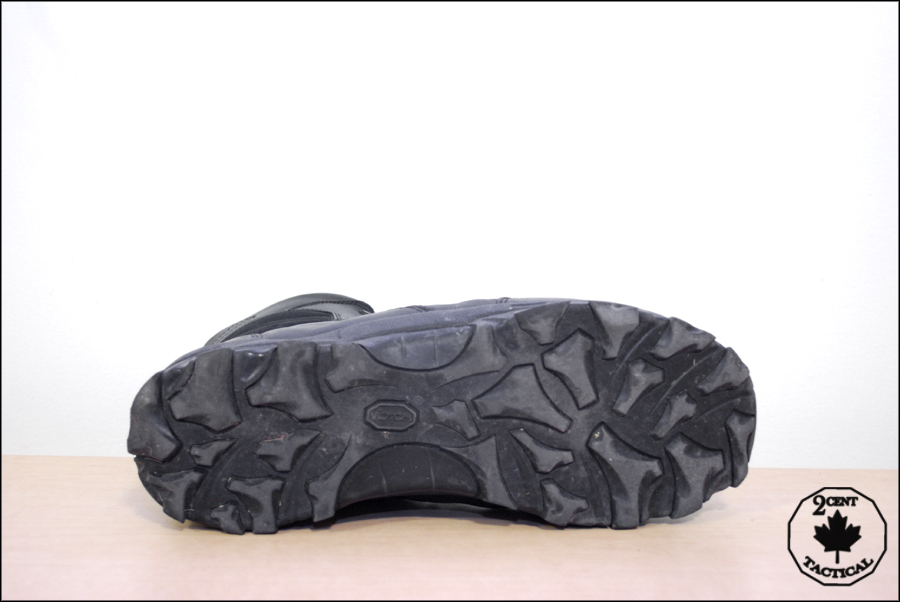 The outer section of the boot is made of a combination of Cordura and leather. The high wear areas are constructed in leather while the others are constructed of Cordura for comfort and weight savings. The waterproof membrane used in the boots is a SympaTex one with a Dri-Lex moisture wicking liner. The moisture wicking liner does a fairly good job at removing perspiration from your feet. On the marches I have completed in these boots it pulled enough moisture away from my feet to avoid getting blisters. Compared to the Goretex Bates boots I had before there was a noticeable temperature difference in the boots. The Bates ones had a significantly larger moisture build up. The eyelets on the top section of the boots don’t bind when you are cinching up your boots. The lower section of eyelets are just your standard grommets as they are rarely used as much as the top ones. 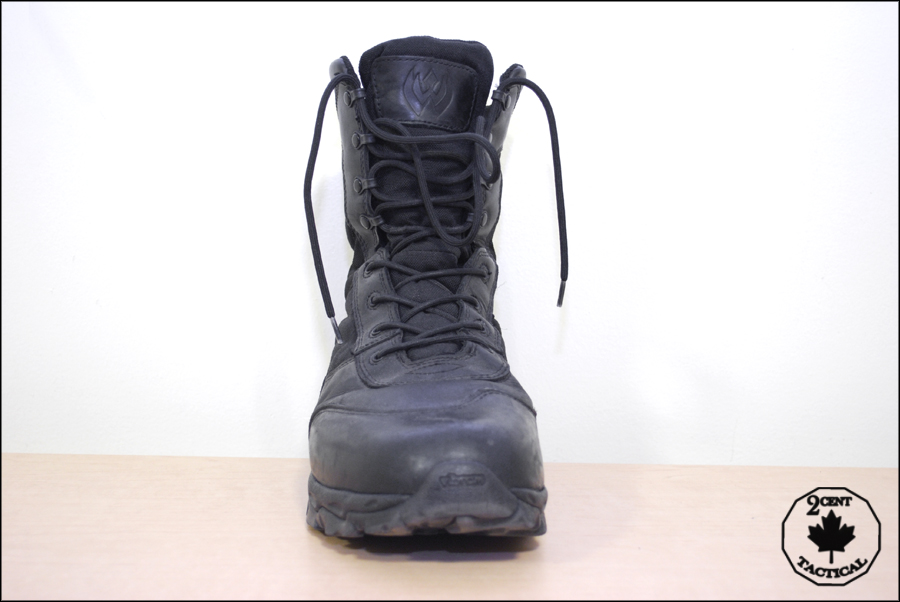 One of my dislikes about the boot are the two tags (one on either side of the boot) that say Waterproof on them. It’s only a small tag much like the one you will find on other gear that says Cordura or Multicam. However I would have preferred to have it just say that on the paper tags that hang off the boots when you pull them from the box. I say this because 99% of the people out there will end up removing these tags if they are used for professional use. The other dislike is the waved reinforcement that covers the toe area. I understand that the added leather was used to reinforce the toe are but I would have preferred a straight cut closer to the laces to avoid any stares from higher ups.

The other side of the boot. Between the second and third grommet in the laces is where the tag once resided 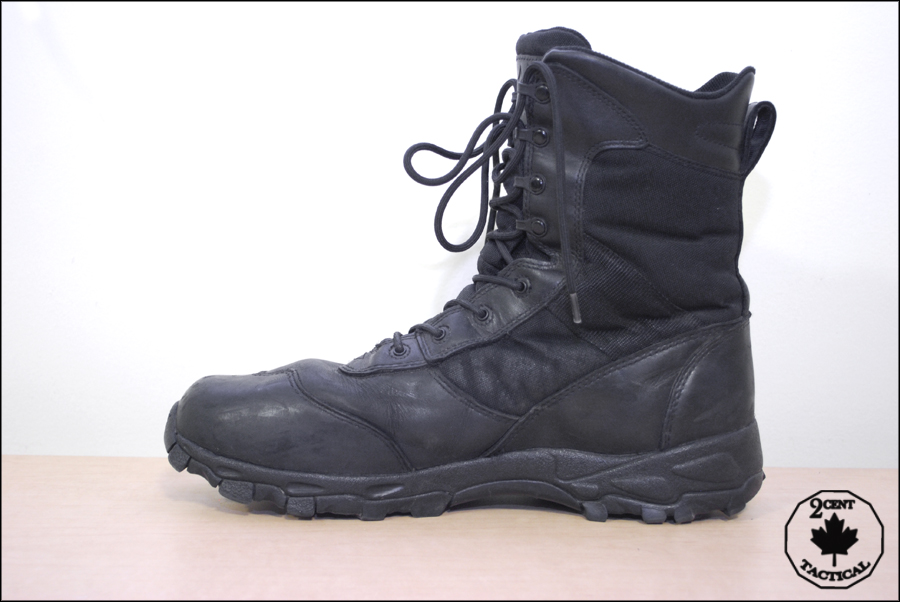 You can see the grab handle at the top of the boot used to pull the boots on. This was an adequate size and will not get snagged on debris 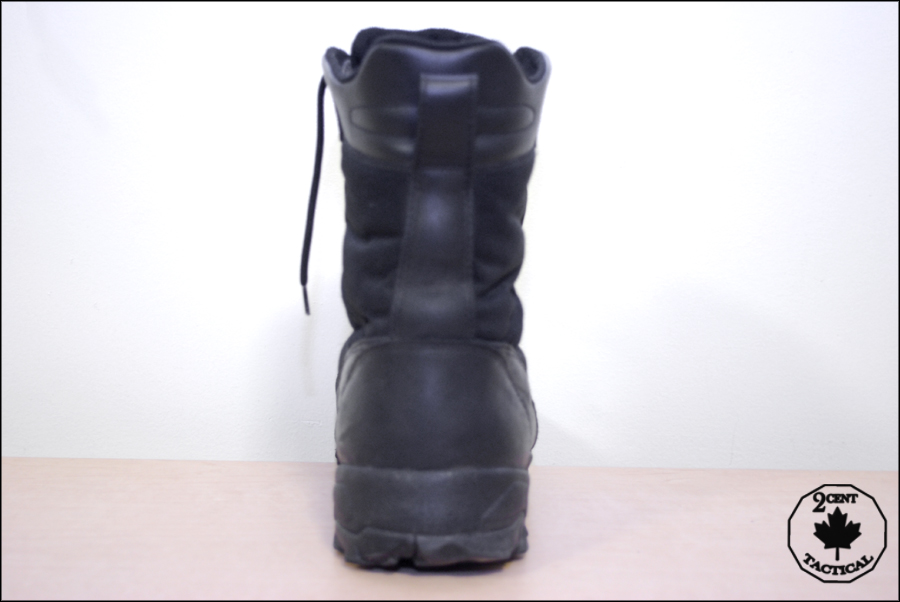 Conclusion
If you’re looking for waterproof boots that are comfortable out of the box then these are the ones for you. I can only hope that Blackhawk will produce a breathable version for warmer weather. I would be on that like a fat kid to cake. I would say these boots are well suited for spring, fall, early winter and summer. I will be packing these babies any time I expect rain. Compared to other boots I had on hand these were fairly light.

Thanks goes to Blackhawk for sending these boots in for review.