Its a strange thing to be told one of the coolest things to see at a massive live fire press event is a piece of software.  However this is what I was told by more than one press member in attendance.  I happened to be eating lunch when one of the press members I was eating with flagged down the owner of the company.  I exchanged my card with him and a month or two later I received an email looking for my address.  Firearms Guide allows you to search for firearms, airguns and ammo using a wide variety of search criteria.  It includes 425 manufacturers and over 50,000 firearms, airguns and ammo.  Not only that but there is a section that has loads of gun schematics for those of you who want to work on your gun or find the item number of a replacement part.

Con’s
-The search options should allow for swapping between .223 Remington and 5.56 Nato etc as it would be an easy option to add and would not require the chart
-The program should allow for an install on the computer to aid in speed of searching

After getting the DVD in my hands I plunked it in my DVD drive and started the program.  You are greeted with a splash screen that displays five main buttons ranging from firearms airguns and ammo, schematics, FFL locator, US to EU conversion chart and printable targets.  My first stop was the firearms section. 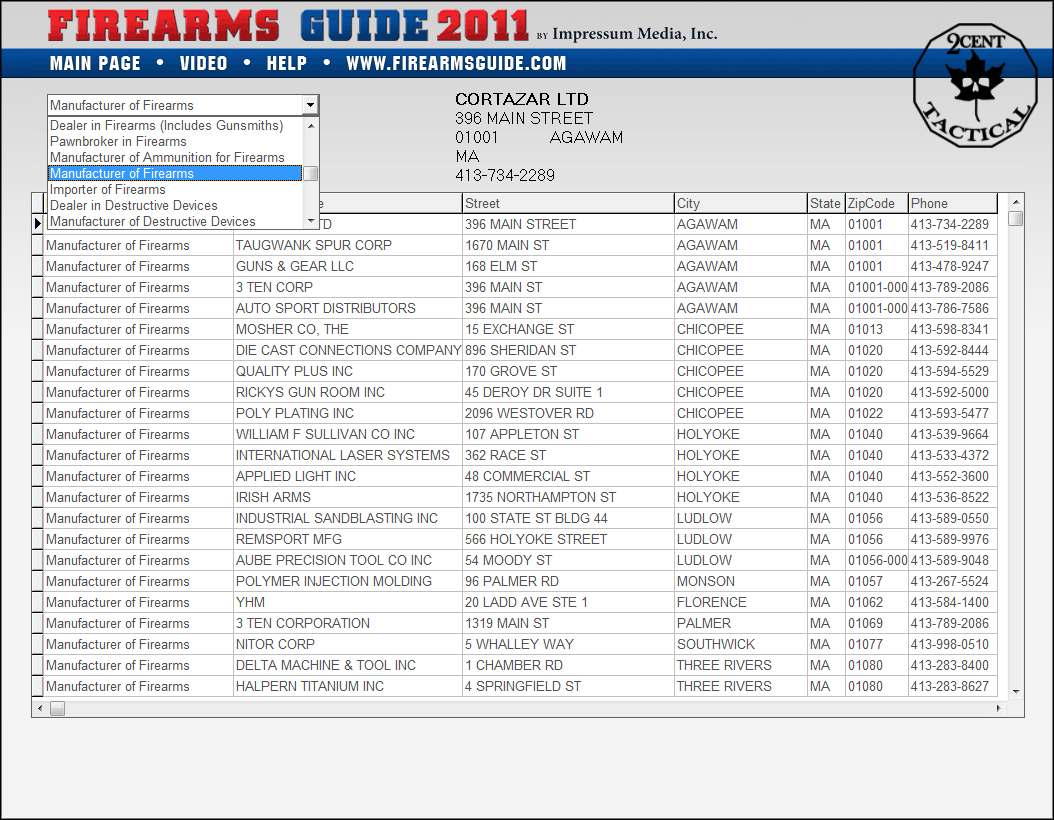 Now you have the ability to pick if you want a rifle, shotgun, handgun, black powder, airgun or ammunition.  The default search area shows a savage rifle and allows you to search for rifles and combo rifle shotguns.  My first thing was to see if it would come up with the Kriss as I picked the various options.  I chose 45 ACP, made in USA, with a round blued/black barrel and a black folding stock made of synthetic/composite/polymer.  Low and behold I narrowed 28 rifles when I selected 45 ACP down to 1 with the search criteria.  After I did this I decided I wanted to see what other options there were out there in 45 ACP.  I cleared the search criteria and only put in 45 ACP.  I looked through the different rifles it displayed and came across the H&K USC which I don’t recall seeing before.  This is an awesome feature for someone who is in need of a new firearm but only knows of a few select things they want in the rifle.  It gives you a shopping list of guns to check out that Google would not be able to do.  I then continued this step going through the pistols and shotguns to locate the ones I was looking for and had little to no problems finding what I wanted.  Some of the more popular cartridges State side like 223 Remington will still bring up a staggering amount of rifles even after the search criteria has been plunked in.

It was pointed out to me that I had made a mistake. There is a section within the search area above all the other drop downs that does allow you to select if its bolt action or semi etc. Its default header says subgroup: All. This allows the searches to be narrowed down greatly. I apologize for any confusion that may have caused and hopefully I changed this before to many people have read this review.

I realize this guide is made with the States in mind and that some guns are not for sale there so they do not show up.  However for informational purposes or for those in countries where those guns are allowed to be purchased it would be nice to be able to see the gun and the various information on it.  The price area could just say not for sale within the USA so there is no confusion.  I say this because I was looking for the FN Mag and it did not come up.

The other thing that I found to be annoying at times was when I was pressing the search options I had to wait for the DVD to spin up before listing off what I could choose from.  If the program was allowed to be installed to the computer it would alleviate that issue.  I ended up making a virtual copy of the DVD on my computer so I would not have this issue.

The target section was an interesting idea for someone who owns a cheap printer.  You can scroll through the various target types ranging from animals and dinosaurs, objects or even just plain old targets.  There was a lack of human silhouettes in this list which would be nice for those people who live in countries that allow target shooting at such. 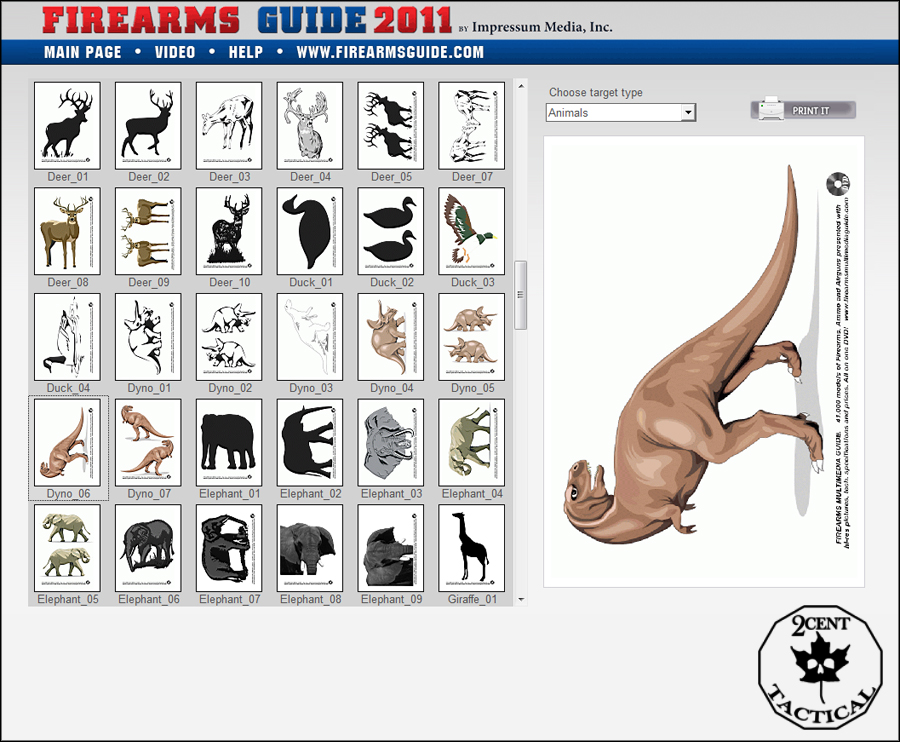 This is not the normal type of thing you would see on this site.  However the majority of my readership are also shooters and I figured this would be of interest to them.  I cannot say this was my favorite thing of the Media Day event held before SHOT but it certainly is a great idea.  There were far too many fun firearms to play with that day.  If you are hunting for that perfect firearm and do not live close to a big gun store with a large selection this program is an amazing aide.  I know this guide has opened my eyes to guns I did not even know that they existed and would not have thought of them as a likely candidate.  At around $40 USD this program can really save you the headache of shopping and is a really interesting way to look at what is out there.  I look forward to getting future versions of this program to look around in and can’t wait to see what they add to it.