The GGG Light Weight Assault Pack is a well built budget pack.  Not to say it lacks anything in quality its just a lot cheaper than most the competition.  The pack was built for them by Tactical Tailor so its quality you can trust.  The TT version of the pack differs by having a bungee cord on the front of the pack to attach other items to your pack.  The other difference is the TT version is made of 1000D Cordura and the Grey Ghost one is made of a lighter material.  That said the Light Weight Assault Pack quickly became a favorite to carry due to its light weight and pack ability. 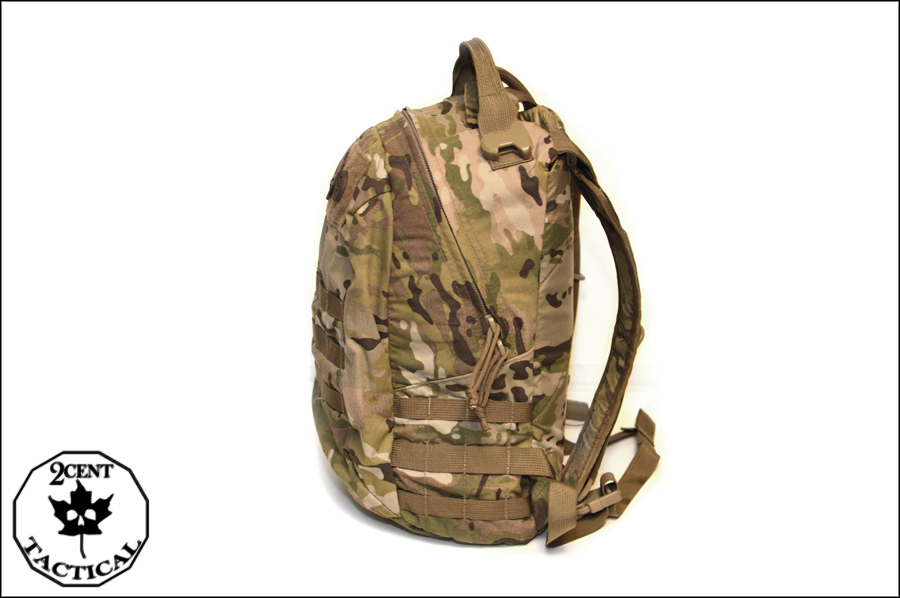 I ordered the LWAP as my first pack from Grey Ghost back when not a whole lot was known about them.  It arrived promptly to my house in Canada and the order process was fairly painless.  I had heard rumors that they just had over runs of Tactical Tailor gear and these were seconds.  When I got it was pretty obvious that TT had a hand in it either that or GG just ripped off the design.  I found the pack to feel like it was constructed well and despite it being light weight and not rigid it felt comfortable when loaded up. 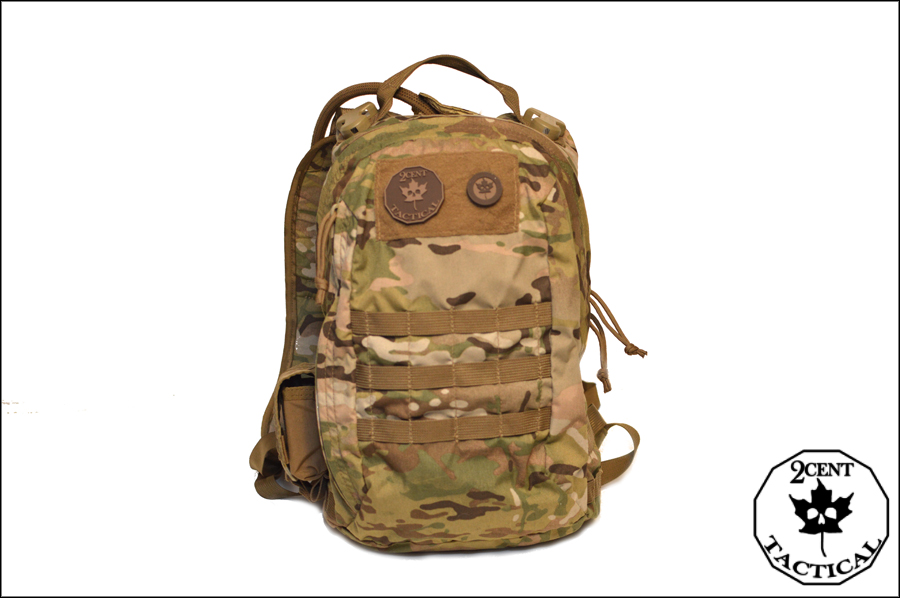 My first order of business was to play with the attachment system that allows it to attach to a vest or a rig with PALS on the shoulders and sides.  I found the attachment system very easy to figure out and with a bit of adjustment for placement found it comfortable with a load of magazines in the front to help balance the weight on the back of the rig.  This combined with the Source Hydration bladder and UTA (universal tap adapter) would make a great hydration rig with storage for anyone wearing armor.  You wouldn’t need to take your pack off to fill the hydration bladder.  All you would need to do is just attach a bottle to the UTA and hold above your head to fill the bladder.  If you need retrieve something from the pack in a hurry you are just 4 buckles away from dropping it at your feet.  The other advantage of this is you don’t have pack straps running in front of you allowing for more of the real-estate on your carrier to be effectively used.  The padded hydration pouch is one of my only real issues with the pack.  It has no routing port to run the hose through the pack and out the hydration port.  You can just run it through the Velcro opening of the padded pocket however I don’t like the hose rubbing around in there weakening the Velcro.  Thankfully the divider wall between the padded pocket and the main part of the bag is made of a rip stop nylon so I just cut a hole and routed away.  I was worried that a full three liter bladder would feel uncomfortable in the back sitting right against my back but was happy to be proven wrong.  I barely noticed it and it didn’t flop around.  The padded pocket has a hanger to attach the top of your hydration bladder to stop it folding over and kinking up.

When you aren’t using the straps and have it attached to your carrier or rig the straps tuck into an opening on the hydration pouch nicely and keep them out of the way. 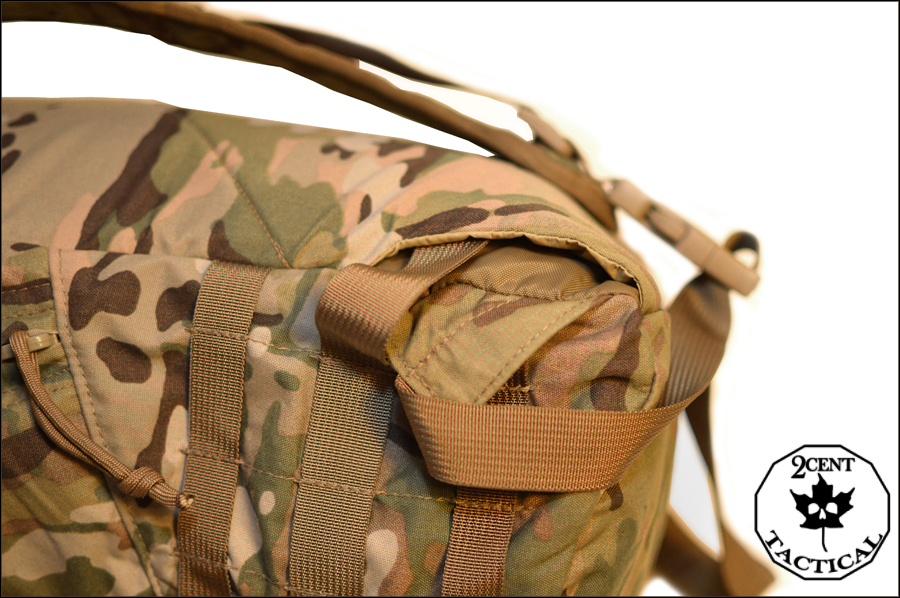 The straps themselves I found to be very comfortable however the like to slip if you don’t use the sternum strap.  The straps have an elastic band at the top and a D-ring just above the sternum strap which are great for keeping your hydration tube in place and not flopping around and getting lost behind you. 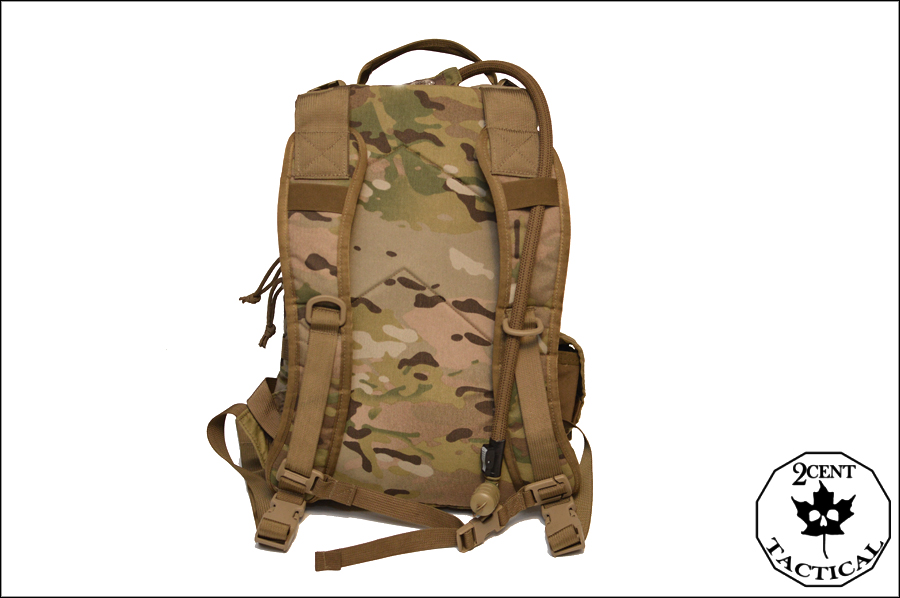 The pack itself consists of three pockets: the front side opening pocket, the main body pocket and the padded pocket at the back.  Around the front and the sides are three rows of PALS webbing.  This webbing may feel cheap at first but then you realize this isn’t the pack you use to mount everything and the kitchen sink to.  It’s there if you need it but not its main purpose.  I can see it being used to attach some Blue Force Gear Ten Speed magazine pouches to or threading some chemlights through them.  I attached a Strider fixed blade to mine for a bit and ended up moving it elsewhere.  The top of the pack has a grab handle, hydration tube or comms cable routing port, and a Velcro panel for patches.  The Velcro patch panel is a good size and didn’t tear off after repeated removal of patches.  The grab handle works well for the size of the pack and makes it easy to pull out between the seats of a truck or out of a locker. 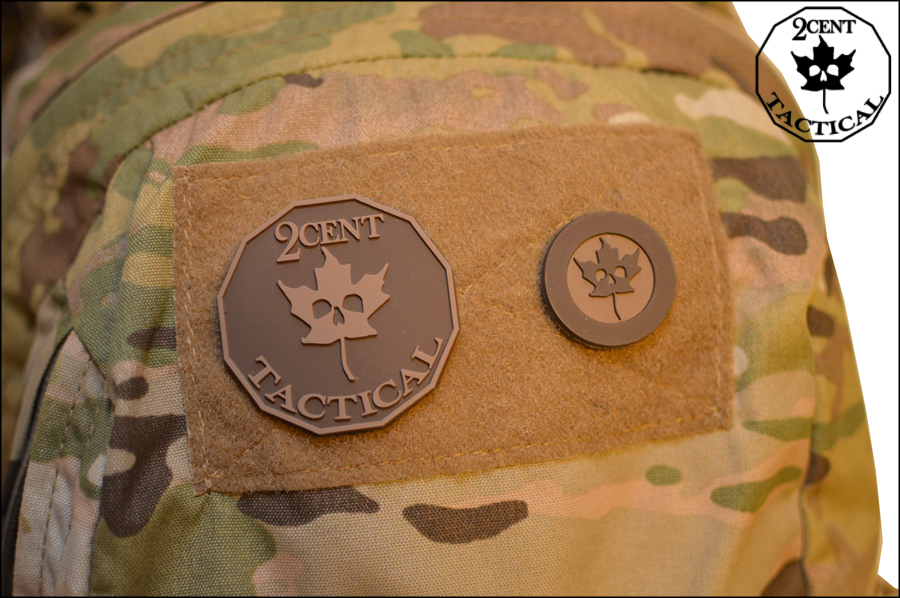 The inside of the side zipper pocket is just an open area.  I used this mostly to toss rations in and to hold my UTA.  This is where you want to store items that you will need readily available to you without having to search. Its a good place to toss a Triple Aught Design OP1 filled up with batteries, fire starter and other small necessities. 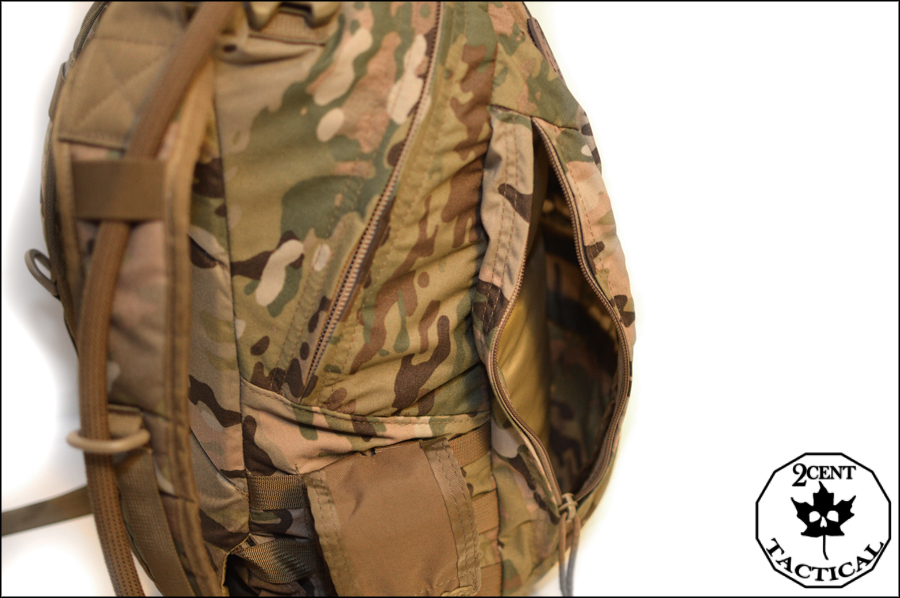 The main body of the pack is a large opening with two elastic topped side pockets at each side of the interior.  These side pockets hold a Nalgene bottle well or you can put an IFAK or other items you need to keep separate but for easy access.  This pack is sized around a 12 hour size and holds just the essentials for you to go in get the job done and get out.  It’s not something you will be living out of for long periods of time.

The comms/hydration tube routing hole in the top of the pack is covered with a flap that has the Grey Ghost Gear logo on it. The opening it covers is generous enough to actually push a bite valve through without having to take the hose apart.

Grey Ghost was a pleasant surprise in the sometimes over priced tactical industry.  They are looking at a more quantity approach to things and its working well for them.  Their gear is priced at affordable levels for the average service person or enthusiast alike.  Since buying this pack I have got one of their PVS-14 pouches which I will review later, a three day pack because Niner Domestic kept eyeing up my pack and a bunch of their stuff sacks.  For a place that got its start as a clearing house for other manufacturers GG is on the right track.  They have deals to produce Karrimor gear stateside which will save people on the shipping.  I wouldn’t hesitate to buy other gear from them and I look forward to where they take things.  For $80 dollars you just can’t go wrong on this pack and if you can get one on one of their epic sales before they sell out you will be getting a pack for the price other manufacturers charge for a pouch.