INFORCE seemed to be set out to create a weapons light built to drop some weight and be ergonomic. They managed to do this in a compact package that is well thought out. Instead of creating a flashlight with a separate mount to strap on they decided to make the whole thing out of a polymer and have the mount molded right in. At first I was a bit skeptical of this small package but it has come to be one of my favorite lights. 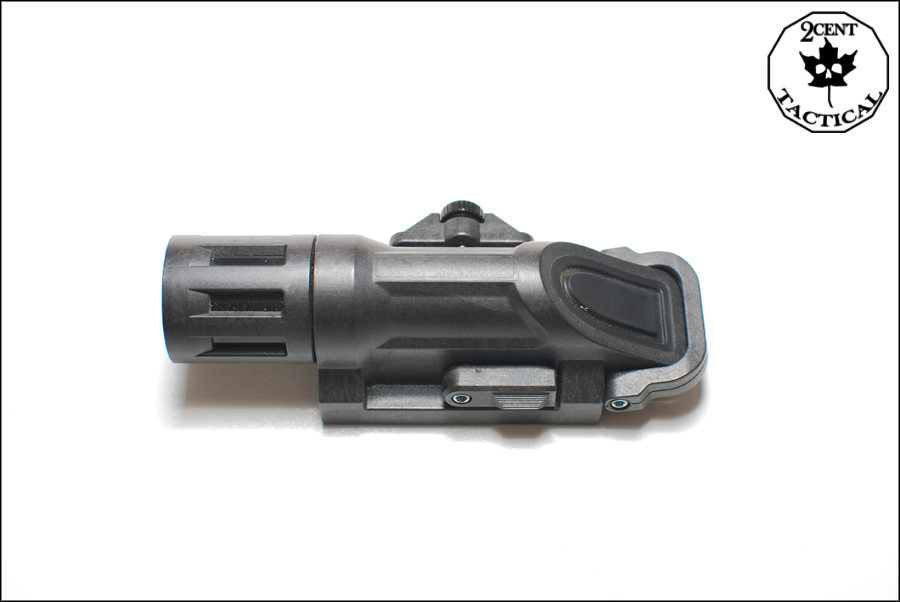 Con’s
-Mode should be partially selectable by the head ie (momentary, strobe and high etc)

The WML has multiple operating settings depending on if you’re in IR or visible mode. When you have the light set to visible mode you get strobe, high, low and momentary. In order to get momentary mode you have to hold the angled switch for 1/2 a second or more. This will keep the light on until the switch is released. I would have preferred this to be a separate option by rotating the head. It would make sure that the other light options aren’t accidentally selected if your motor functions get a bit stressed. That said if you practice with it often and ingrain the movement into your head this shouldn’t be a huge problem. If the angled switch is depressed it will enter high mode unless you use the options to swap high and low around. If you want low press the button twice in 2 seconds. If you go to fast it will switch into strobe mode. For strobe you just double tap the switch quickly in under two seconds and you will get the strobe function. On high the beam produces 125 Lumens which is great for CQB and short to medium engagement ranges outside. At first I felt like this light should have a brighter LED like the one in my PD20 which is also a single cell CR123a battery light. However in practical use it turned out the lower powered light was preferable for battery longevity and bounce indoors. When operating in a urban environment the last thing you want to do is blind yourself off of a wall when your light bounces off it. The LED INFORCE put in this light is a great compromise. It is able to light up a room easily while still providing enough light to disorient the person in your sights to give you those extra few seconds to react. The strobe function is slower than the other lights I have looked at but still does what it is sent out to do. If you want to change the order of high low or disable the strobe go to this link here http://www.INFORCE-mil.com/download/user-manual-white-ir.pdf and there are easy to follow instructions in case you lost your manual. 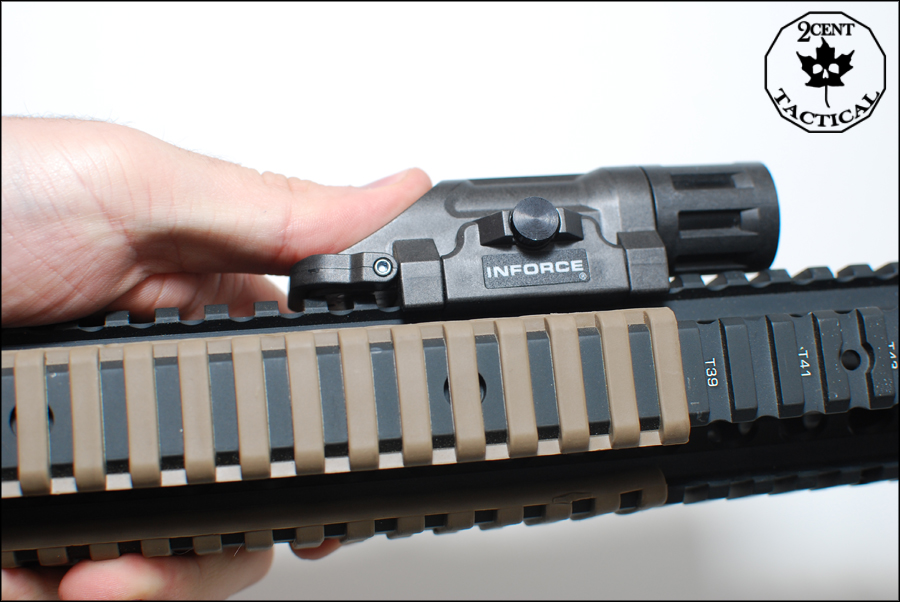 When the light is switched over to infrared (IR) the light only has three modes high, low and momentary. Each of the modes is selected just like the white settings so I won’t go over them again. The IR light is produced by four IR LED’s in the reflector that give off a faint red glow. On the high setting you will get 75mW of IR power. When I received the light I thought that the red glow of the IR LED’s used would be quite noticeable. 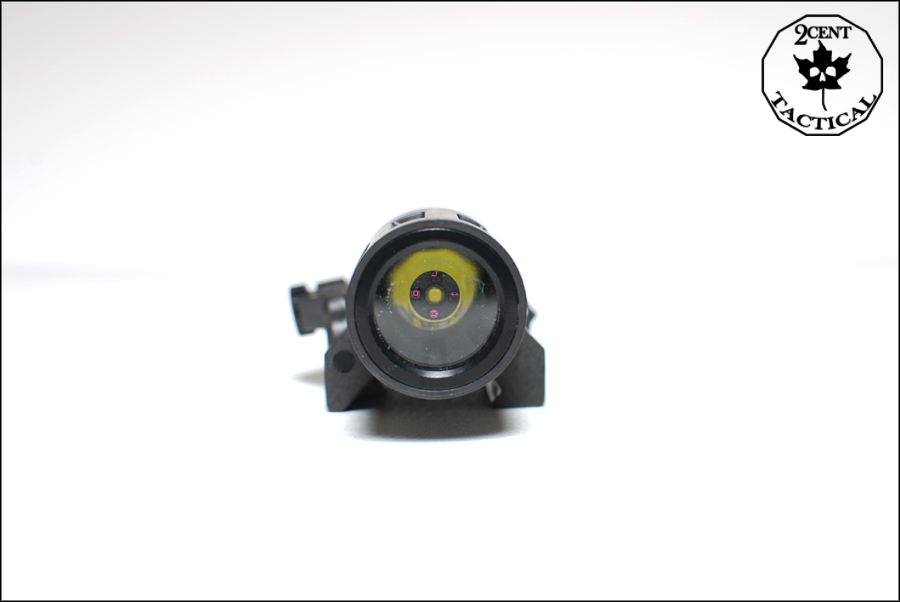 However in CQB force on force the non night vision equipped side never noticed. If you know what to look for you can find the red lights but it takes effort. I am not sure if an IR filter recessed into the reflector would help dim this glow while not dimming the light considerably. I don’t have a filter around at this time but I plan to check this theory out as it would be a fairly cheap modification. The IR light while slightly lower powered then the other options on the market is more than enough. The other lights on the market almost all use two CR123a batteries and take up far more rail real-estate. I found the IR light invaluable for searching windows of buildings at night and when I moved into a large warehouse with no real light sources. The night vision was struggling to see well and with the IR engaged on high or low it made a huge difference. It made target acquisition quite easy and the power on both high or low did not was out a class 1 IR laser which was great. The combination of the two proved to be a huge advantage. 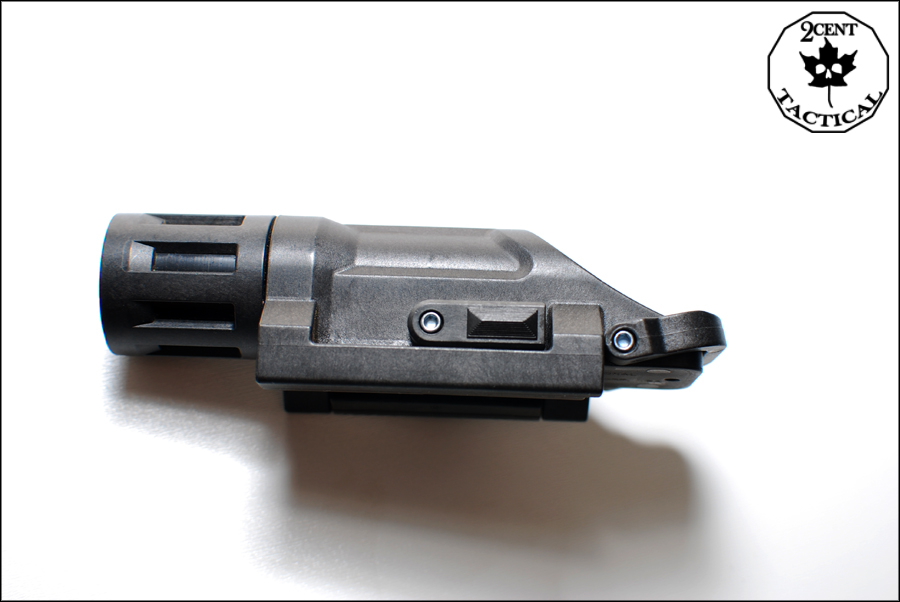 The light has several different controls/features on it. The first of those is the angled switch at the rear of the light. This switch works best when the light is attached on your support side. When using a vertical grip or holding the hand guard/rail your thumb naturally places itself on the switch. The switch was easy to operate even with the slightly bulky gloves I was wearing due to the weather. The angle of the switch does add some extra length to the light but it doesn’t cramp your finger on the rail since it allows it to ride up on it. The tail switch also has a unique safety method that I have not seen before. It has a mechanical safety which is a bar that rotates up. This bar stops your finger from actuating the switch and you would have to really try to turn it on. 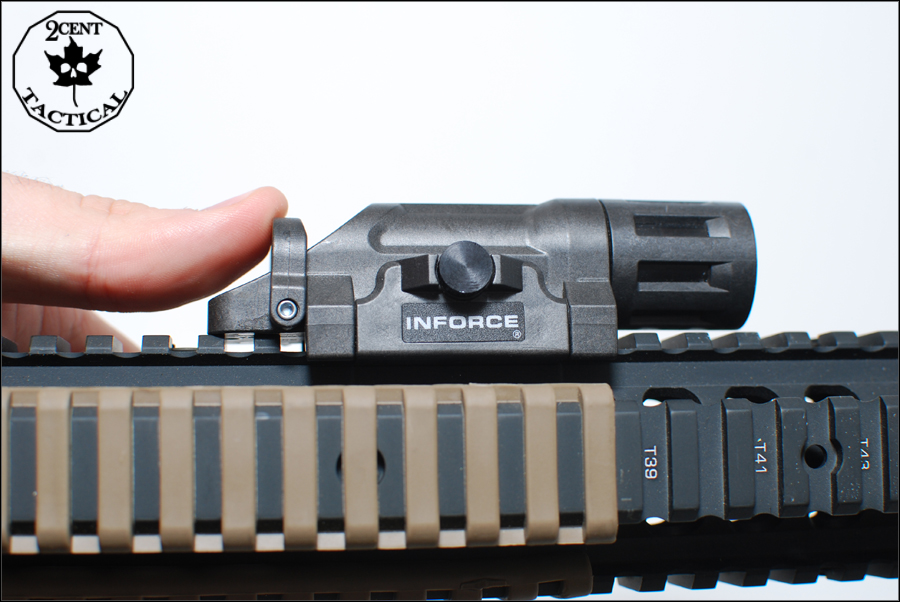 In order to turn the light back on it just slides back down with a pull of your thumb. The safety has good tension and won’t really move on its own. 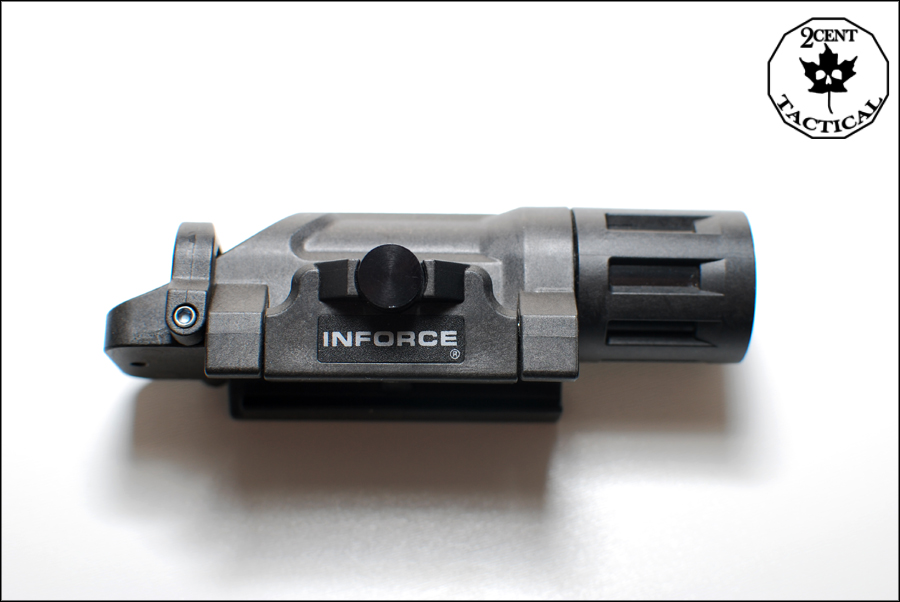 The next lever is the IR and white light selector lever. This resides on the left hand side of the light. When the white dot is visible you are in visible light mode. This means that the switch is facing towards the front. If you pull the switch backwards there is no visible dot and this means you are set on IR. This selector lever can also be used to turn the light off if the tail switch were to get stuck for some reason. All you do is swap it to the other mode and it will turn the light off. 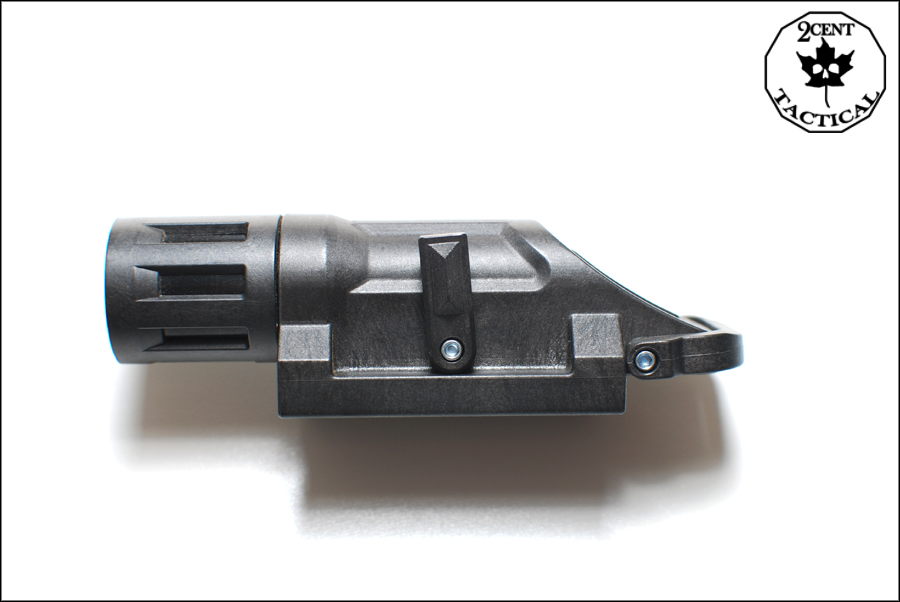 On the right hand side of the light is the innovative rail clamp. To put the light onto a rail you loosen the thumb screw and press in on it. This will open the spring loaded arm or jaw allowing you to hook the other side onto the rail and drop the pushed open side down onto the rail.

This takes less than two seconds to do and makes for a sturdy mount. Even without the screw the mount likely won’t come off however INFORCE added a thumb screw that makes it so the arm can’t be pushed in. It’s a simple lock and it works great. The jaw/arm has great spring tension and doesn’t show any signs of being a problem. 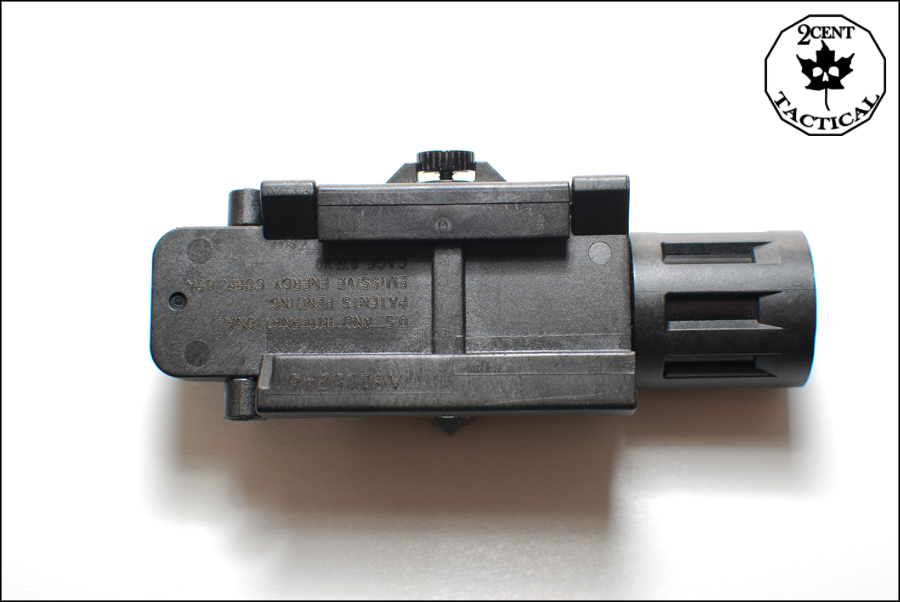 The head of the light also acts as another safety. If it is partially turned the light won’t turn on. This ensures that it can’t be turned on by anything other than you wanting to turn it on. This is the highest level of safety on the light but is not practical to do if you come under contact so the safety lever is preferable. I would have preferred the head to select certain modes so that you can have an only momentary mode and one that is high and strobe. The head is nicely constructed of a metal inner with a polymer outer. The outer has venting to help dissipate heat from the LED unit when it’s on. The threading on the head when it is unscrewed is nice and strong. Above the threading is a well lubricated o-ring that will keep out moisture from the unit. The battery of the WML is the only one I have seen where it is inserted positive side in instead of out. Thankfully the battery tray lets you know this by having a massive plus sign in there. 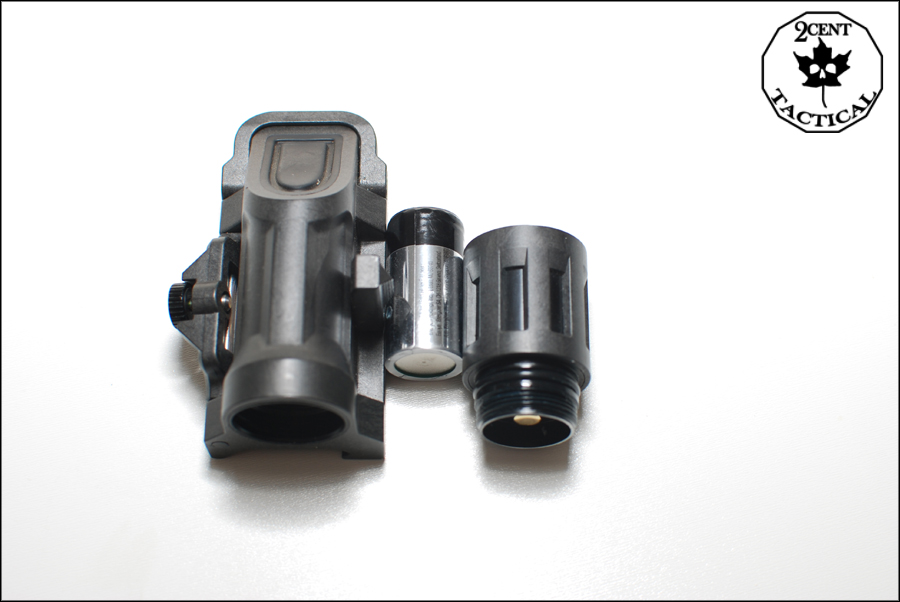 The WML comes in two color schemes tan or black. It also comes in a white light version or the dual version that does white and IR like I have. As I said I was kind of sceptical when I first got it and so were some of my infantry friends. I was pleasantly surprised by its performance and now want one in tan as well as black so I can mount it to my Ops-Core helmet using the rail adaptor for the arc rail. The WML comes in far cheaper than the competitors. The built in mount and ergonomics of the unit make it a real winner.

The following video was shot using a camera held to a PVS 14 with the gain on the PVS 14 set lower to show the units ability to illuminate a target at a distance. The unit is actually brighter but we were making do with the kit we had at the time. If I get a chance and build an actual videoing rig I will get pictures of it in an urban setting.