Kydex gear is something where your most expensive tools you need to make it are a Dremel, toaster oven and a foam press… It’s cheap to get into and it seems everyone and their dog these days is trying their hand at it. You have some of the bigger companies like Raven Concealment, Off the Grid Concepts and several others at it but how does a small company get noticed. Quality, turn around speed, and customizability were certainly what got me interested in JDC Custom Kydex. 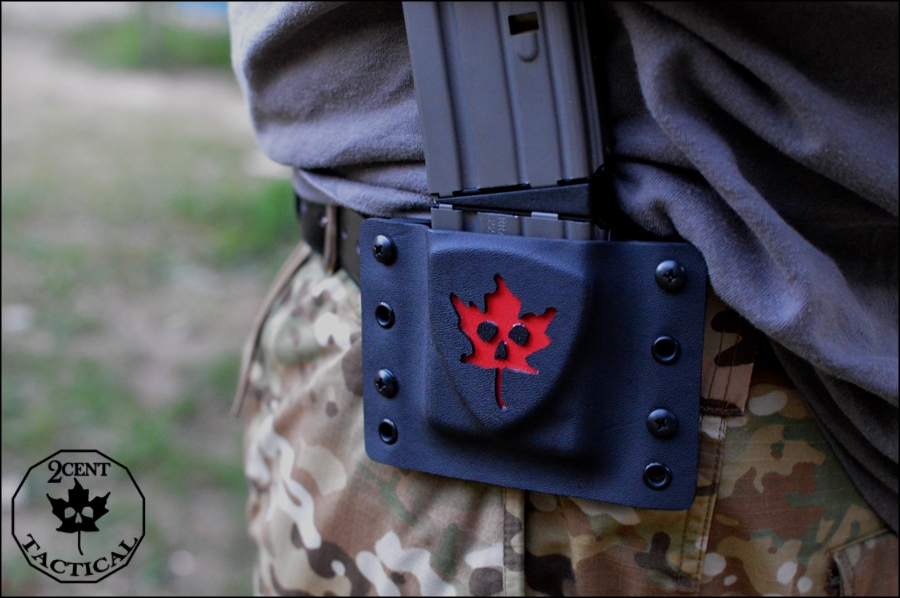 For those not in the know about what kydex is I will give out a quick bit of information. Kydex is a thermoplastic sheet. Plastics come in two different types thermoplastic and thermosetting. In order to form a thermoplastic sheet it is heated up and then positioned on both sides of the item you want to cover. The sheet is moldable once heated and pressure is applied to it in order for it to conform to the shape of the object you wish to hold within it. If retention of the holster starts to loosen up through use it can be reheated and formed again. This is one of the benefits of kydex. Just don’t leave your kydex in a car where it can get really hot as you may not have the same retention you once did. A thermosetting plastic is heated to set the shape and is not able to be reheated to form after the initial hardening. 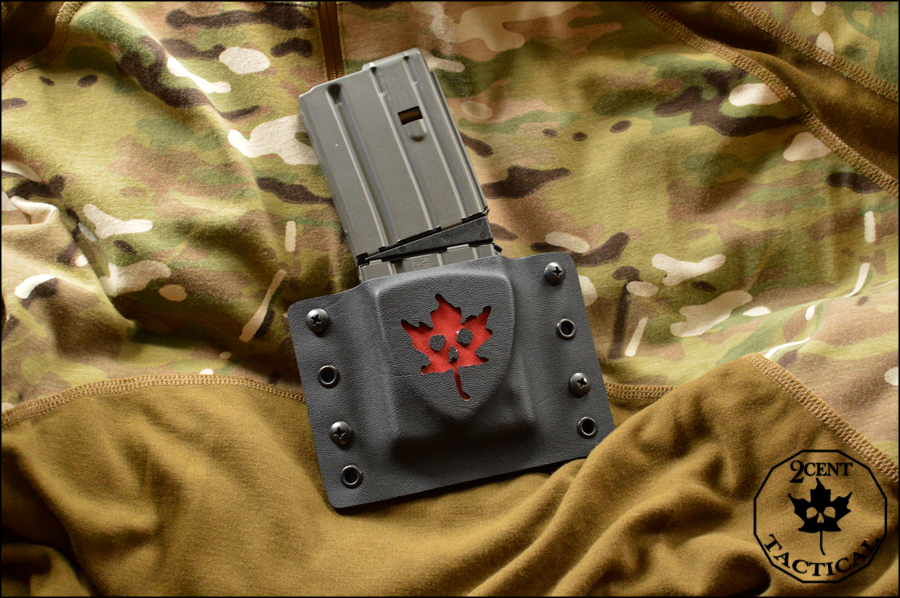 Justin from JDC Custom Kydex had entered a contest where I forced the entrants to make art for my own enjoyment. I said people could draw on a bar napkin for all I cared as long as it was an attempt. I didn’t get many submissions mostly because it was harder to enter then the normal “I am in” and a page share most Facebook contests hold. Justin quickly whipped up a piece of kydex with a free hand version of my Skull Maple Leaf logo on it. We ended up talking through Facebook messenger and he offered to make me a magazine carrier to run on my belt. I had been interested in trying out kydex gear for awhile but never made the leap. Some times at the range I don’t want to wear my belt rig and this fit the bill. I took him up on his offer and passed on the details of what I needed.

I listed that it needed to have the magazine inserted in a certain way to make it useful for the LAR-15 magazines and couplers I am forced to use as a Canadian to get a full sized magazine that holds 10 rounds of 5.56 mm on each of the two coupled magazines. Once I showed him what I wanted and let him know which side of my belt I wanted it for he went off to work. A few days later I got a picture sent to me and it was in the mail on its way to me.

When it arrived the first thing I noticed was the awesome detail Justin put into the logo he put on my magazine carrier. He had cut out the logo and then glued in two eyes and the nose. I was worried about the eyes coming off, but so far bumping around in my gear bag and on my belt they are holding strong. It’s pretty cool how he used the red piece of kydex as an insert to make the logo visible. Obviously a giant red logo isn’t something you would run if you’re trying to be keep a low profile however it does have its purpose. 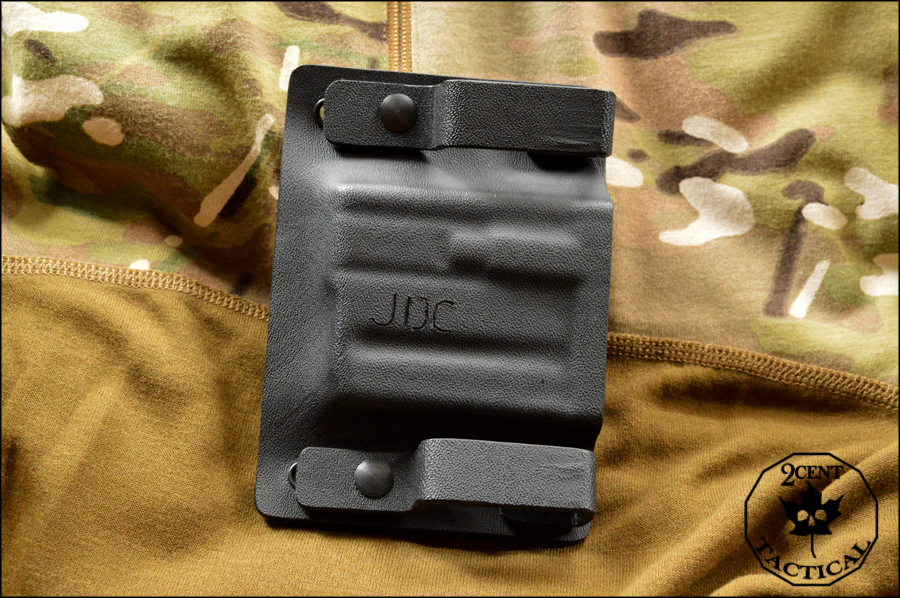 I can see kydex pouches like this being a cool way to show off shooting team affiliation, even a sponsor for shooting matches or to hand out to people as unique promo gear. I mean what do you really want a pen and sticker? or a holster or magazine pouch?

The rest of the magazine carrier’s body is well built and formed correctly. The edges are all smoothed and deburred providing a quality end product. The belt loops once mybelt was inserted held the carrier firmly in place with little to no movement. This means when I reached down for my spare magazine it was always where I last left it even when shooting urban prone.

Conclusion
I wouldn’t hesitate to head on over to JDC Custom Kydex to get holsters or other kydex material made again. He may be a small shop but the proof is in the product. Head on over to their Facebook page https://www.facebook.com/JDC.CustomKydexHolsters as they don’t have a website currently.