Few sounds in the firearms world are as recognizable as a shotgun being pumped to load a round in the chamber. It’s a sound that can cause just about anyone to comply with the holders demands. However that sound means one of the very few rounds the shotgun holds is now in the chamber. Shotguns typically range in capacity from 4-8 rounds. Sure that shotgun shell is firing several good sized pellets at the target but what if you miss? What if there is more threats then you have rounds? S&J Hardware came up with a simple solution to the problem, have more rounds on the shotgun to be readily loaded when time or circumstance permits.

When you order a DSC you get the peel and stick female Velcro for the side of your shotgun, and the actual shell carrier itself. The female Velcro is the industrial kind and applies with ease. Just to see how much of a pain it would be to remove I pulled my spare one off to see the effects on the shotgun receiver. I expected sticky residue but was pleased it came of clean with a good amount of force. 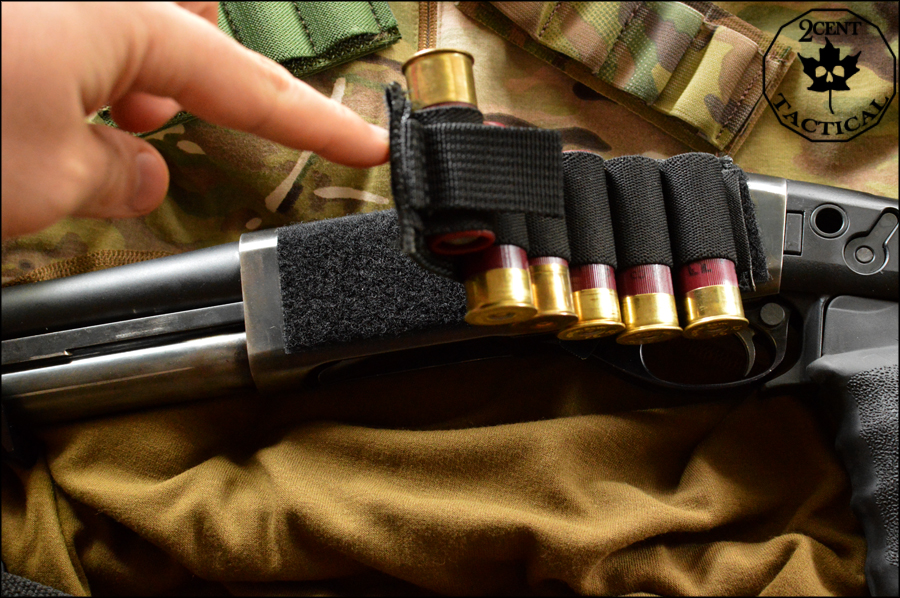 The carrier comes in several round counts depending on the users specifications from 2-8 loops. The DSC comes in 4 different military and police color ways: black, olive drab, tan, and Multicam. The DSC is made from materials sourced from Canada and the United States. 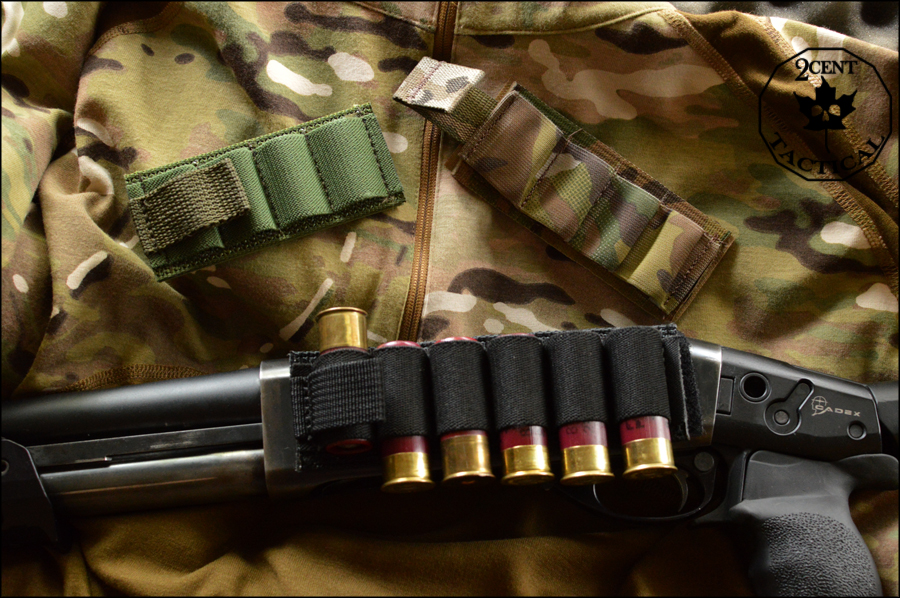 Having had some issues on friend’s shotguns with rigid metal or plastic shell holders my first concern with the S&J DSC was if it would hold shells under recoil. After many rounds ranging from target rounds up to 3” Magnum slugs and buckshot I can honestly say it does this job well. Unlike the rigid carriers the DSC is not as easy to reload while it’s on the shotgun. When it’s empty it is tore off the shotgun like a spent magazine and another is placed on.

Even after repeated removal of the DSC everything still holds well. To see if issues would come from heat and shells being left in the DSC much like you would find in a cruisers trunk I left my DSC fully loaded with dummy shells and Velcroed it to the back of the seat in my truck. As we all know heat inside of a vehicle in the summer can reach stifling temperatures. The shell was left in a loaded state for several weeks and was taken directly to the range. It was mounted on the gun and 60 shells were fired through the shotgun to see if the shells would slip at all. Thankfully everything held nice and tight. The Blue Force Gear Ten Speed elastic magazine pouches have made me hold a new appreciation for elastic and thankfully the DSC’s elastic proved to be just as good. 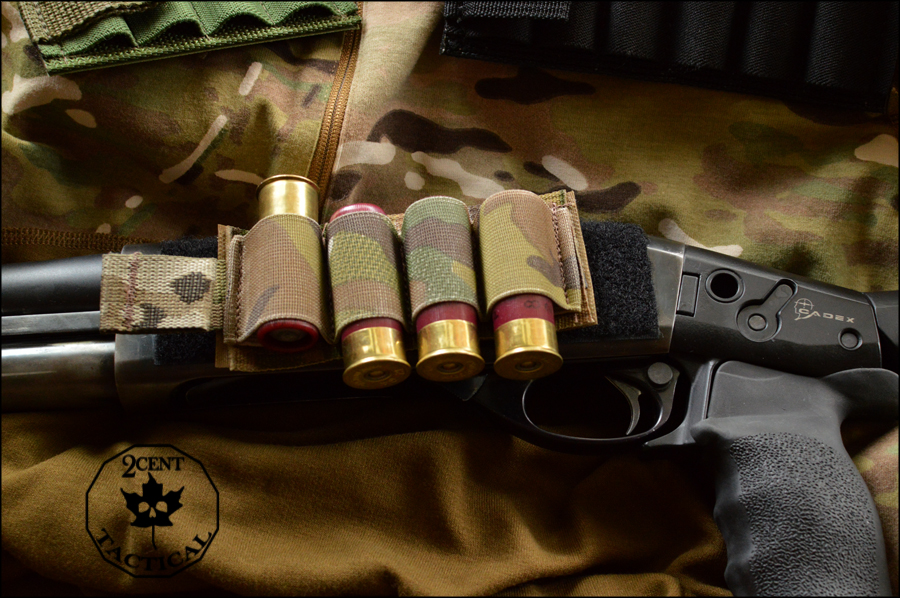 Currently as the new S&J Hardware DSC Pouch is unreleased and I only got to play with the prototype my DSC’s were stuffed into my HSGI Taco pouches. The Velcro in the pouch made it so that when I wanted to pull a filled DSC out of my pouch I would grab the pull tab of the DSC and yank outwards. I would then slap it onto the shotgun. The pull tab allows for easy indexing of the pouch when attaching it for those who run all their shells except the first few down. This allows for easy slug changeover or combat reloads depending on what is contained within each. The nature of the DSC lends itself well to being set up to carry rounds of different types. This way if I need buckshot I can draw from the pouches on my left and slug from on my right if I don’t run a combination of the rounds on one DSC. 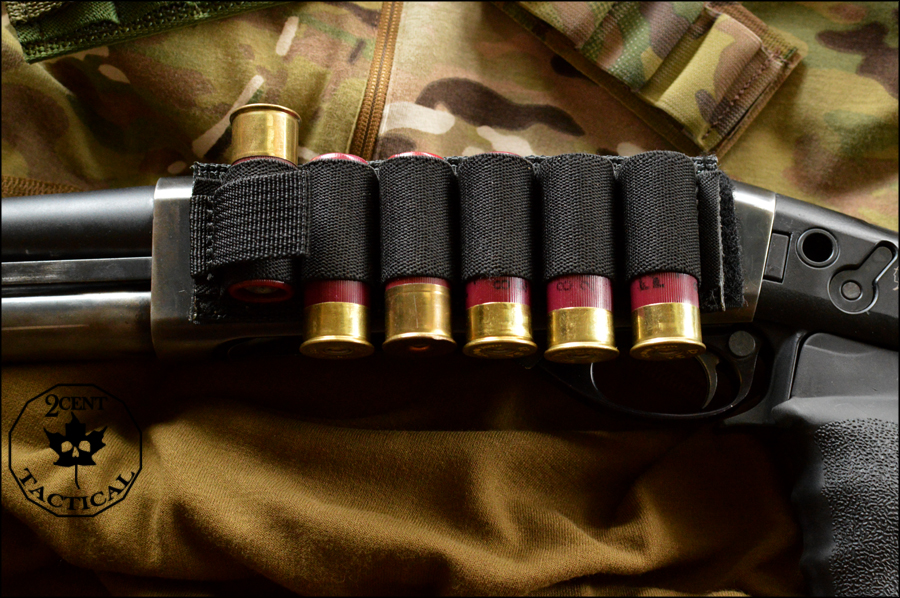 For a starting price of $12 CAD for the 2 shell holder up to $20 CAD for the 8 shell holder the DSC is really a bargain. The product is well made and actually keeps the shell close to where you need them. I can’t wait to get my hands on the upcoming DSC pouches.

Made in Canada Shell Carriers No Comments