Whether you’re interested in them for the looks cool factor, home defence, or putting a bayonet on your work shotgun, S&J has made a mount for you. The S&J bayonet mount is compatible with their own magazine extensions as well as the factory Remington 870 magazine extensions. The S&J adapter makes it so that any AR bayonet, such as the M7, M9, or ZT bayonets, can easily attach to your shotgun. Though this review is for the standard Remington 870 variant, the adapters are also available for the Mossberg 930 and 535/835as well as the 2012 870 tactical with the new long fixed 6 round magazine tube. 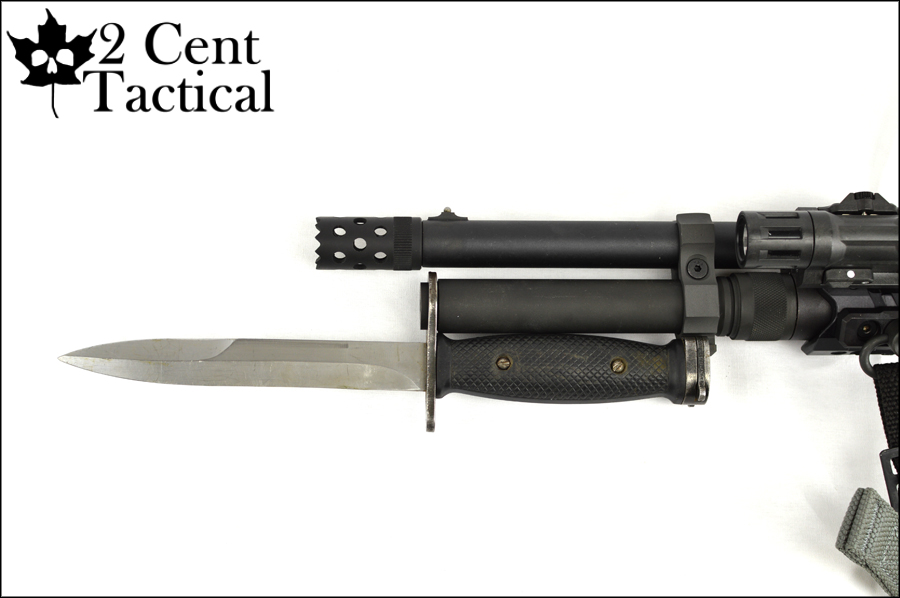 The S&J Hardware bayonet mount is made from a single piece of 4140 steel. The center of the mount is drilled and tapped to fit a bolt which tightens the mount onto the barrel and magazine extension. Even if your extension goes past the end of the barrel like in the case of a +3 extension on an 18.5” barrel you will still be able to attach the bayonet. 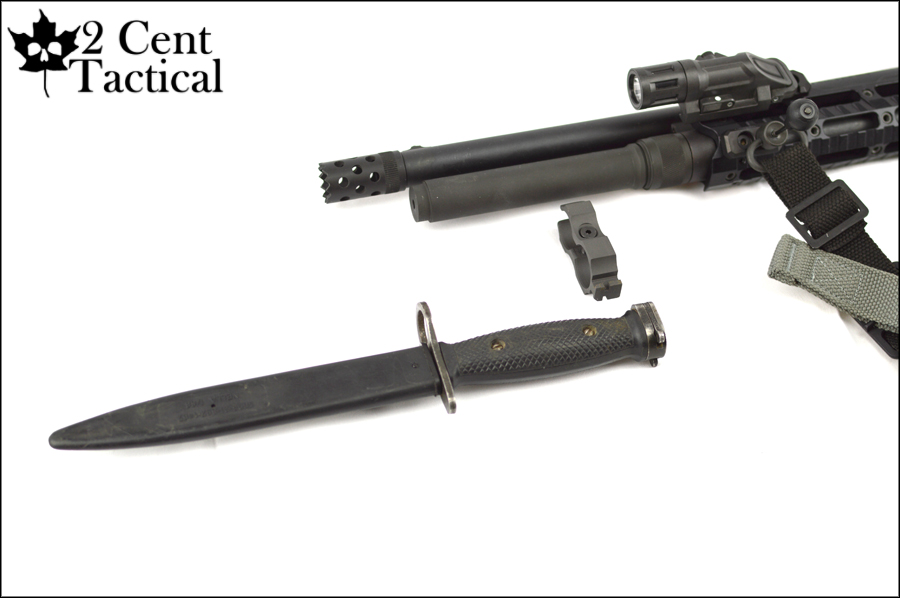 I was initially worried about how this mount would hold up and if it would cause damage to my extension when the bayonet was stabbed into a hard surface like a breast bone or a piece of armour. To test if this fear was warranted, I repeatedly stabbed a 2×4 over and over again to see if the stabbing and jarring motion might snap the threads or cause a bend where the extension attaches to the shell tube. The mount I have attaches to both the extension and barrel providing a bit of extra support for the whole system which I am happy to report suffered no damage from the testing. 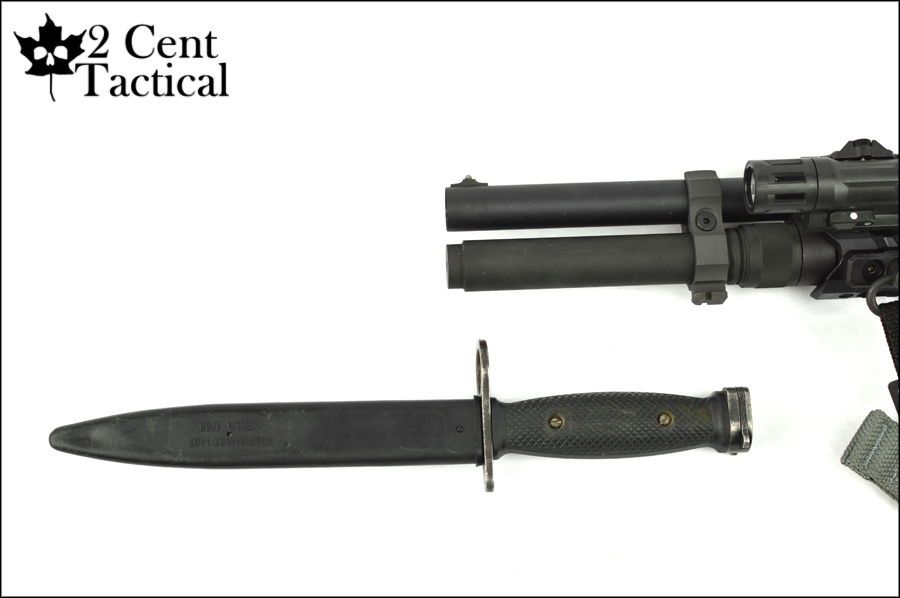 There is, however, some wobble when a bayonet is attached to the S&J mount. This might be caused by the actual QD mount on the bayonet and not the S&J mount thought. I tried two bayonets; the one pictured and a rather ratty M9 bayonet that my friend had and wanted me to beat up. The wobble doesn’t affect the performance of the bayonet and it remains fixed on the shotgun even when considerable force is used to pull and pry it from a stuck object. 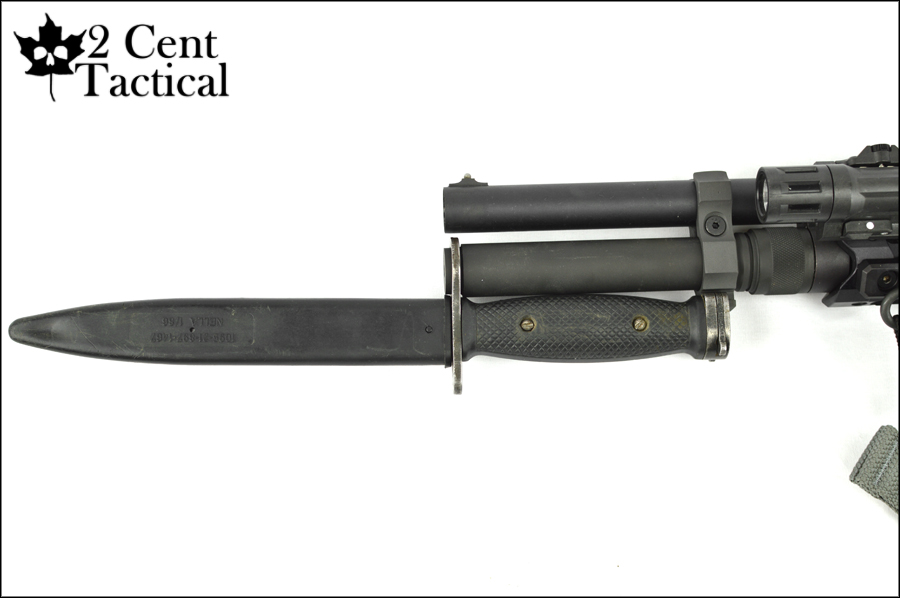 Now onto the first line of this review: some people will scoff at the idea of a bayonet on a shotgun, however, to me it makes a lot of sense. In the confined space of a building like your home or one that you might have to enter as a cop or soldier, the unique properties of a shotgun can be both a blessing and a curse. Beyond the obvious advantages of having a powerful weapon that requires less precise aiming in close quarters, the low round count and considerable spread and inaccuracy of pellets that exit the barrel of a shotgun means taking a shot in a close quarters environment is not always advisable. Think of it this way, you happen to hear a sound in your house in the middle of the night. Your room is on the second floor of your house at the end of the hall, the stairs come up with your daughter’s room to the right and yours down the hall to the left. You get to the stairs and find an intruder coming around the corner at the top of the stairs. You could take a shot but you also risk the rounds penetrating or missing him and heading into your daughters room. With the bayonet you could run up on him instead. It simply adds an extra option to your tool box and the added weight of the small adapter is negligible and goes unnoticed. I can also report that even with a bayonet mounted you can fire the shotgun just fine, the only result is blackening of the blade.

The bayonet adapter retails for $74.99CAD. To someone who only uses their shotgun to shoot paper or ducks this might not be the product for you, but for someone who wants the ability to attach a bayonet for work or defence this is one of the few products around that will allow you to securely attach a bayonet to your shotgun.

Attachments Made in Canada No Comments