Sometimes a product comes along and makes you want to shout from the rooftops. This is one of those products. I picked this coat up as a multi-purpose layer. I had recently got issued the new Cadpat Gortex rain gear and wanted something to layer under it. I am not a fan of a bulky winter coats because if you start to overheat you don’t have any way to remove layers to cope with your bodies temperature. 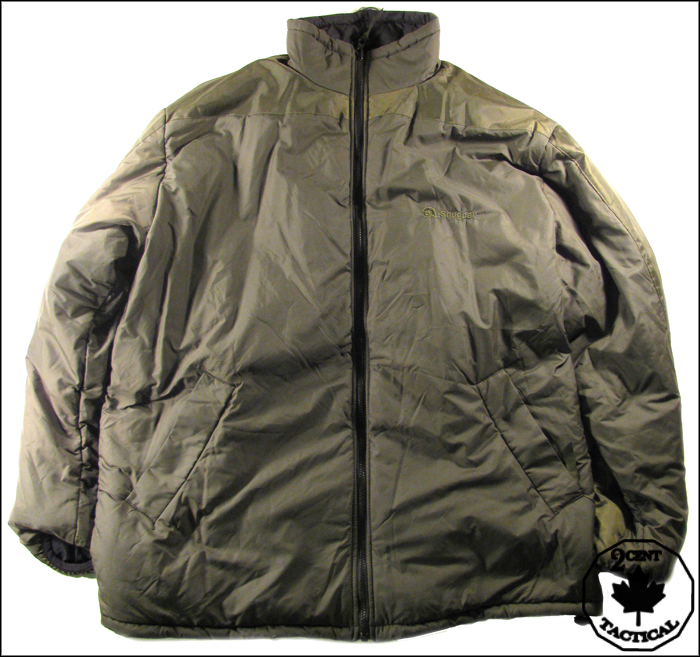 The green side is the reinforced side of the jacket made for military style work. The Snugpak logo is nicely stitched on the left breast of the jacket in an unobtrusive green thread. The tops of each arm are covered in a reinforced strip of a nylon like material. This strip of reinforcement goes from the wrist to the collar of the jacket and travels around the backside of the shoulder area.

You can see the reinforced shoulders here 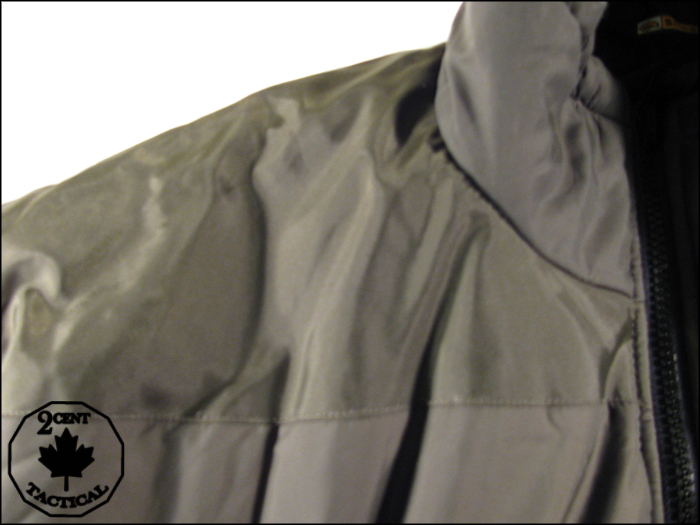 The reinforcement running along the back of the jacket 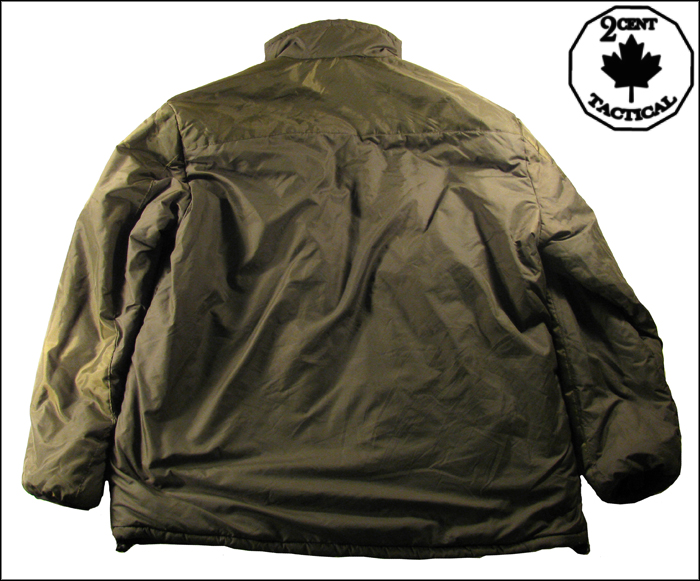 You may ask why this reinforced strip is there and it’s actually a really good idea for it to be on the jacket. The main body material for the vest is made of a sleeping bag material. This material isn’t exactly tear or scratch resistant. Snugpak has reinforced the area that a rucksack will bear down on and the arms so that when they brush up against things you won’t have a tear.

The collar for the green and black side are the same sleeping bag material which I believe is called PARATEX LIGHT. It feels very nice to the touch and seems to be semi windproof. The collar did not chafe me even when I had a bit of facial hair going on. This is key because when zipped up the collar goes a good distance up your neck. For you large necked people out there like myself this next feature is not as useful but to the skinny necked ones it’s great. The back of the collar has a draw string that can be used to cinch the collar tight so wind doesn’t blow into your jacket from the top.

The cinch and collar region 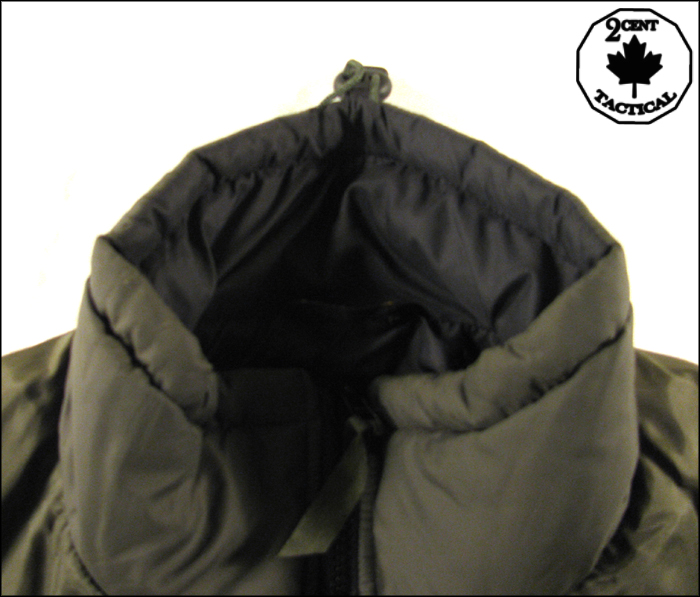 The green side of the jacket has less pockets then the black side of the vest. This is due to the fact that it is meant to be a layer and not an outer garment so you can wear your lovely camouflage items on the outside. The green side just has the two pockets one at each side just above your hip. The pockets are spacious and fit my massive hands in them which is a plus. The pockets are closed with a zipper which thankfully doesn’t seem to catch on the fabric. 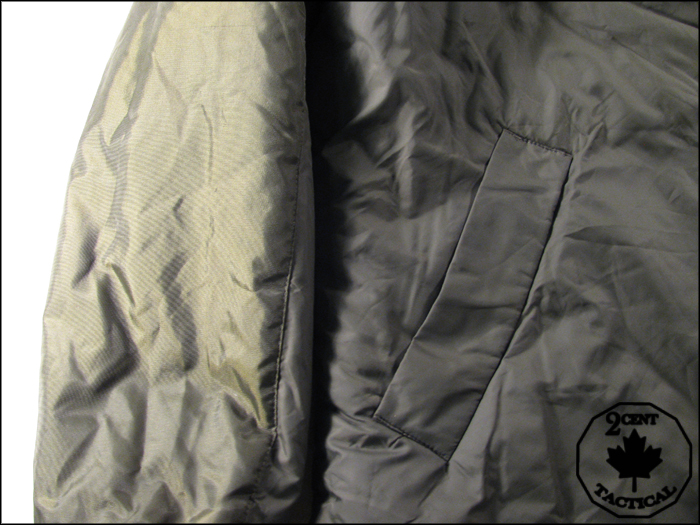 The wrist of the Sleeka is an elastic style wrist. This style of wrist helps to keep your body head in the jacket and stop cold air in. The elastic is a generous size and will not cut off your circulation even with huge wrists.

A closeup of the wrist 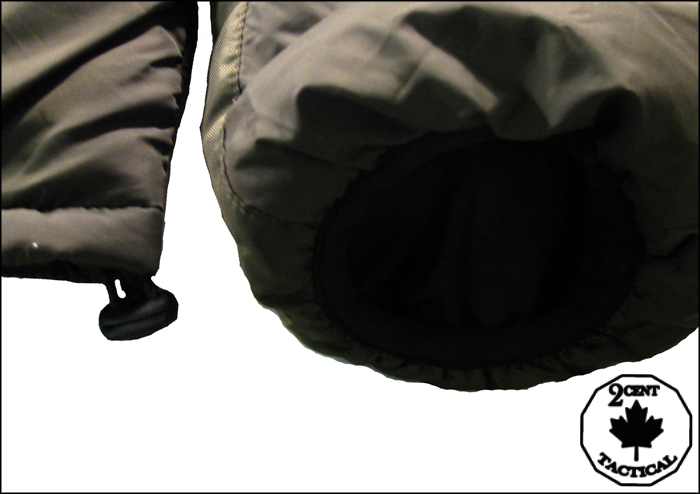 The black side is meant more for wearing it as a civilian coat. The Sleeka’s black side would also be well suited as a layer for police or naval personnel who wear dark uniforms. It is devoid of the reinforced shoulders and arms that the green side has. I would like this as a feature on both sides because life is full of places to ruin your fancy jacket and I seem to find them often.

The black side of the jacket 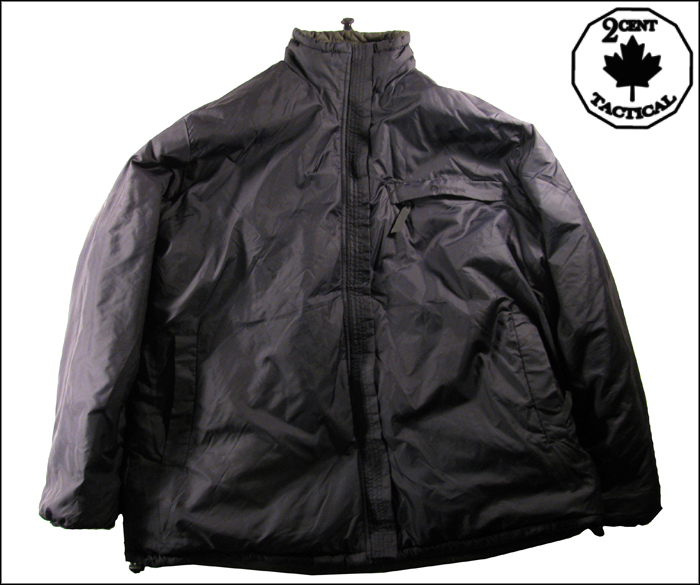 The black side has one of the features of this jacket that I don’t like. The wind flap that runs the entire length of the zipper seems weirdly designed to me. The only attachment point for the flap is a Velcro square at the very bottom of the flap. So if you are using the black side and its windy the upper region of it flaps around a lot. This could have been remedied by several other Velcro spots along the length of the flap. Another thing I don’t like about the flap is the four rows of vertical stitching running the length of the flap. I think this just isn’t aesthetically pleasing but that’s just me and does not effect the function of the jacket. Otherwise when you are using the green side of the Sleeka it does seem to keep the draft out so mission accomplished in that respect. 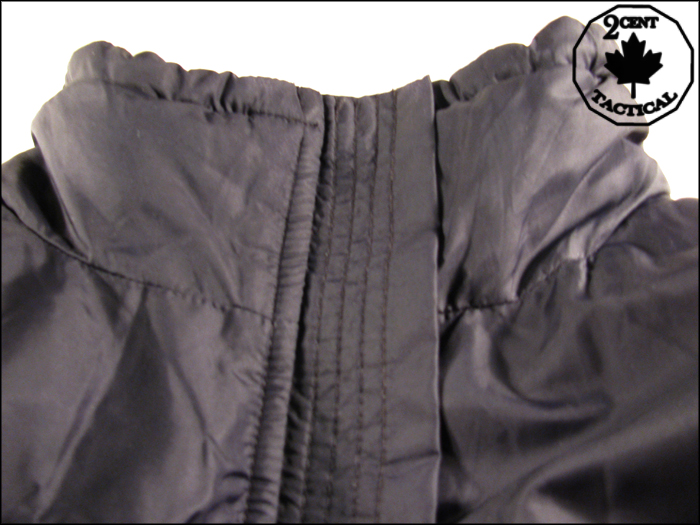 The black side of this jacket has an extra pocket not found on the green side. It has a chest pocket at the left breast with a weather flap covering the zipper. This flap is also the location of the Snugpak logo on that side of the jacket. I would have preferred a Napoleon style chest pocket due to ease of use. All three pockets are a generous size and allow me to put my hands in them to retrieve things or in case of the ones above your hip hide them from the elements. 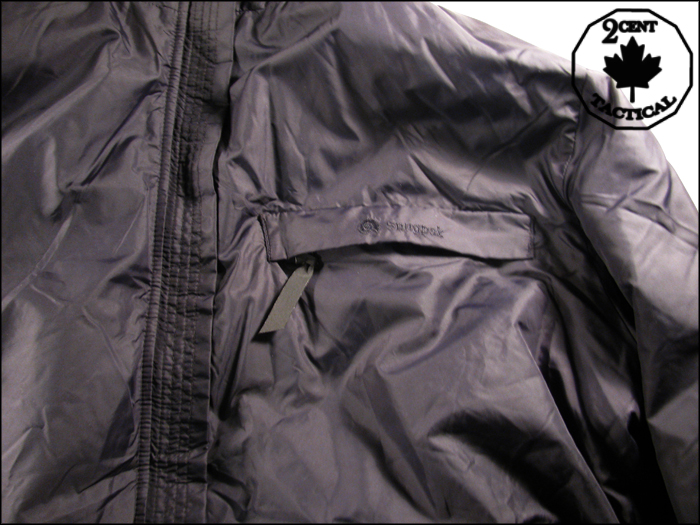 At the bottom of the coat there is a draw string which allows you to cinch up the coat stopping wind from blowing up into your coat and trapping all that nicely built up heat. This is also where my only other issue with the coat comes in. The cord that comes out allowing you to cinch the fabric down is coming out of a seam where the black and green side meet. This area doesn’t appear to be reinforced so I can see it coming undone with repeated cinchings. I would think a small grommet would hold up to the wear and tear of the string better than nothing. This also goes for the one in the collar.

As with almost all of Snugpak’s offerings the Sleeka comes with its own compression sack. Mine had a small tear where the tag was but had not come undone further. I almost always compress my jacket in the included bag to pack it in my ruck or truck. When the Sleeka is crammed into the compression sack it roughly measures 13″x6.5″ and when fully compressed 6″x7″ which is a substantial space saving.

The Sleeka just crammed into the stuff sack no compression 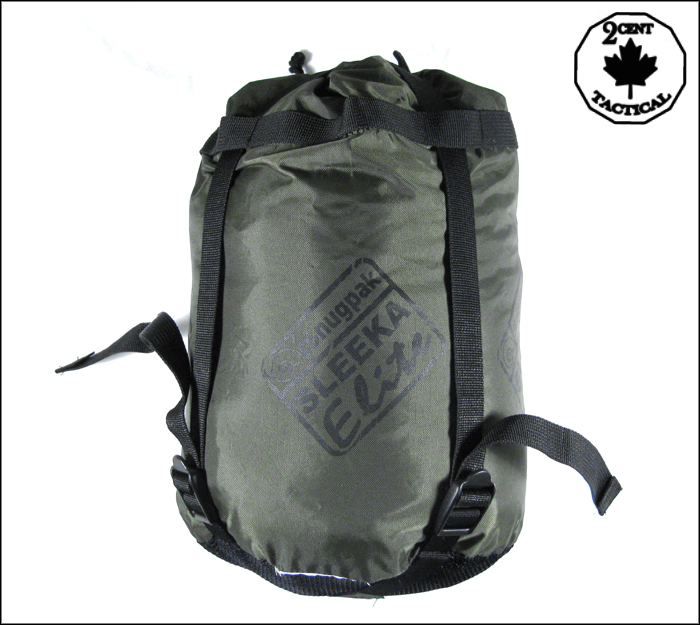 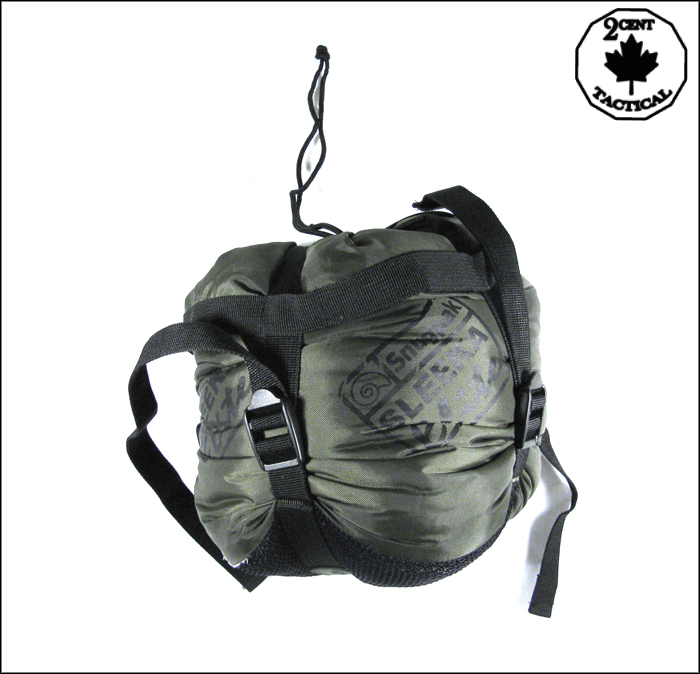 I have now had the chance to use this coat in two weeks of army work. I used it in conjunction with my rain jacket and it kept me warm in the freezing cold wind and at night. The material feels very nice on the skin too. I also wore this jacket under my riding jacket on the way home on my motorcycle. This jacket is worth its weight in gold. My trip was 5 hours at night where the temperature was around -1-+2 degrees Celsius. My upper body was never once cold the entire trip going at a determined speed on my bike. My legs on the other hand felt like they were two solid blocks of hamburger meat. Other then the cosmetic issue and the draw strings this jacket gets top remarks in my book. It has a comfort level of -5 but is rated to -10 degree Celsius. As part of a layering system this will serve you well into the winter. The vest comes with a very nice stuff sack. It crunches down to half its size when in the stuff sack and makes packing it a breeze. My stuff sack did come with two ripped stitches where the mesh meets the bag material but hasn’t seemed to worsen with repeated stuffing’s yet.