A lot of times people get a knife or other tool and expect it to do everything under the sun. Knives are something that often get misused because people don’t understand the various functions of the design of the blade and grind. The Spartan Blades CQB Tool has one and only one function poking a bunch of holes really fast in a bad guy when working in close quarters. I met the folks at Spartan Blades and saw the CQB Tool during SHOT and knew I had to have one. I got the chance to get one in a trade from a friend I jumped on it. 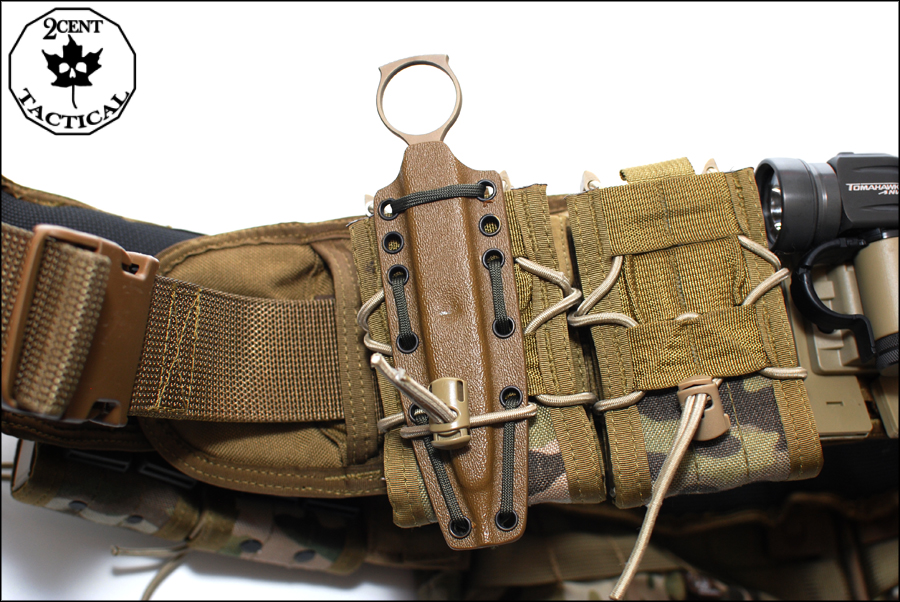 Overview
To call the Spartan Blades CQB Tool a knife would be correct. It is sharpened and can cut things however it’s closer to a shiv then a knife. You can cut things with it and I have used it to open a ration pack and other things when this was close at hand. The real purpose of the CQB Tool is to stab an assailant multiple times until they are no longer grabbing onto you or your weapon freeing yourself to go back to your primary or secondary.

The knife is made of only one part, a solid piece of steel. The blade is double edged and only sharpened at half of its length. The handle of the knife has three finger groves on each side allowing for a comfortable grip. The middle of the three grooves is jimped providing extra grip. The ring is the last part of the knife allowing you to lock onto the handle by looping a finger through the ring. All of these features combined allow for a solid grip while violently hammering it into someone. 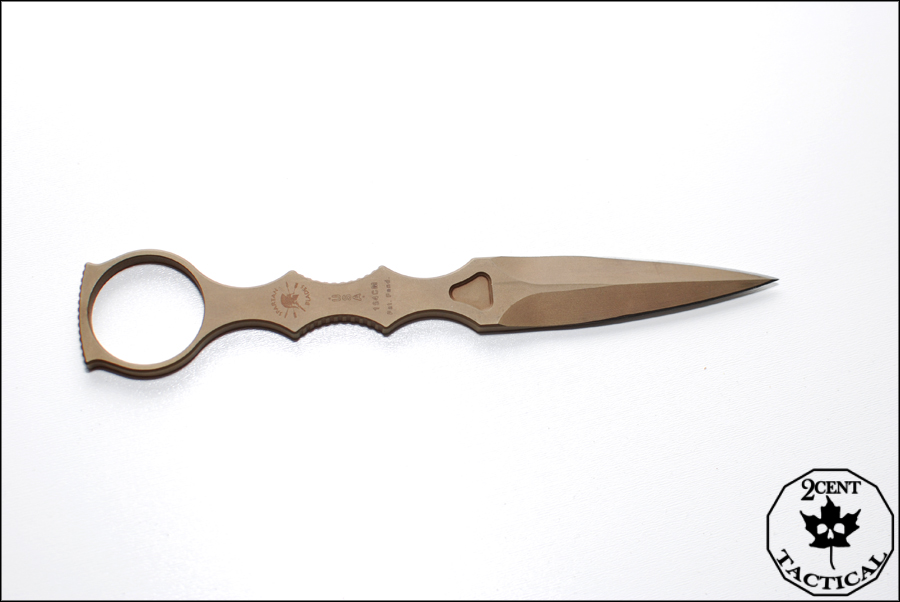 The main design of the knife calls for it to be mounted on the breast bone of your chest rig or plate carrier. However I no longer have a need to wear a plate carrier and at this time prefer a belt rig to a full blown chest rig. Since I wear a belt rig I decided to mount the CQB Tool to the weak side of my belt rig. This allows me to maintain grip on the firing controls of my primary or secondary if it is grabbed in a struggle. I would just need to stick a finger through the hole at the end of the CQB Tool pull it out and stab with my support hand until they let go. 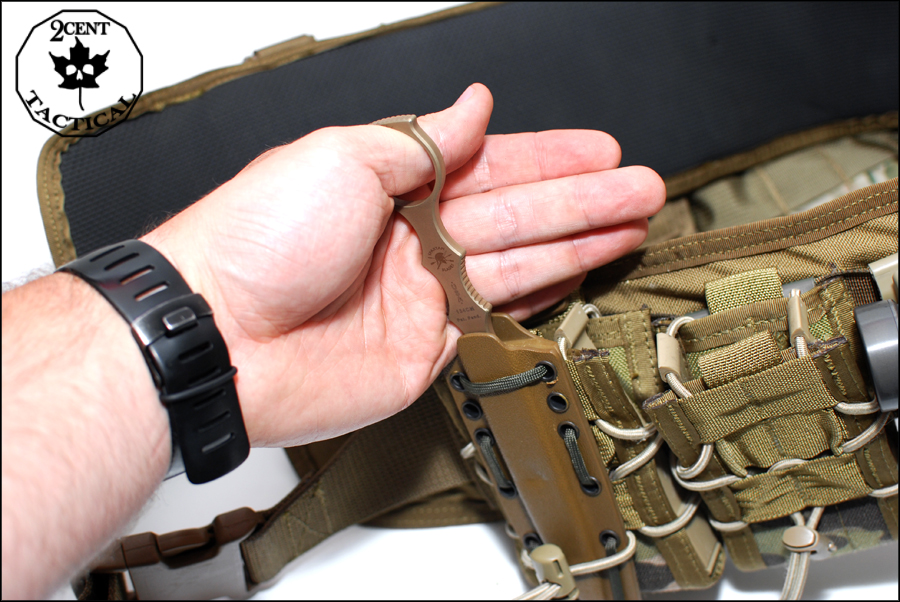 The blade is only sharpened at the top half of the blade allowing for a fast grip with no concern for indexing your hand or it sliding up on the stab. The grind allows for the knife to puncture even thick clothing like leather. This allows you to get to the fleshy bits underneath that will cause the pain required to gain the upper hand in the fight. The ring on the CQB Tool works well for three different grips. With the thumb through the ring it allows for a reverse grip on the blade. By doing this after drawing the CQB Tool and winning the fight you can grab your secondary or the vertical grip of your primary and continue shooting. This will make it so you can put the knife back into the sheath once the danger is no longer present. This works the best with the knife attached in the tip down position. 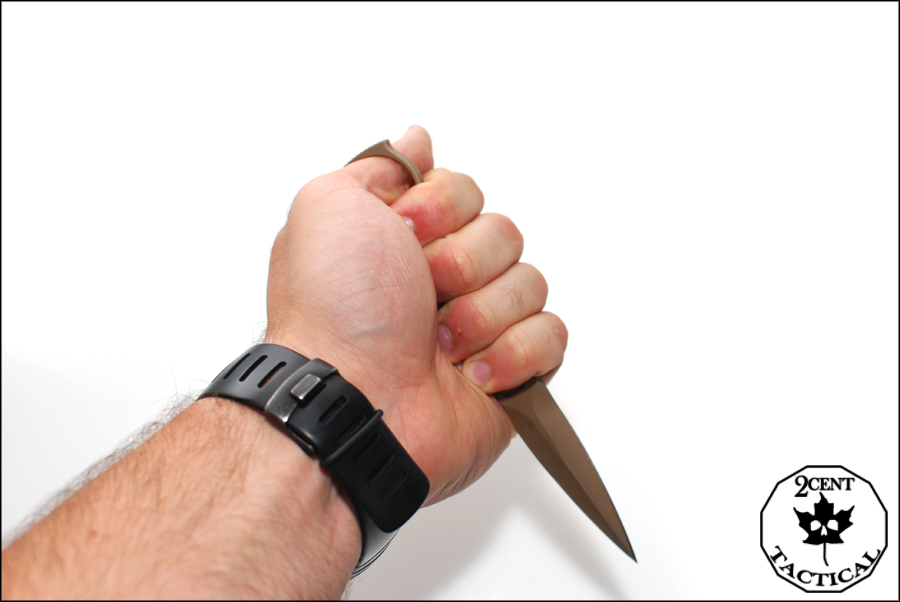 You can also modify this grip by putting your pointer through the ring and your thumb on the butt of the ring. This will help keep the knife in your hand better and transfer more of your energy into each blow. It does this by partially stopping the handle from slipping in your grip. 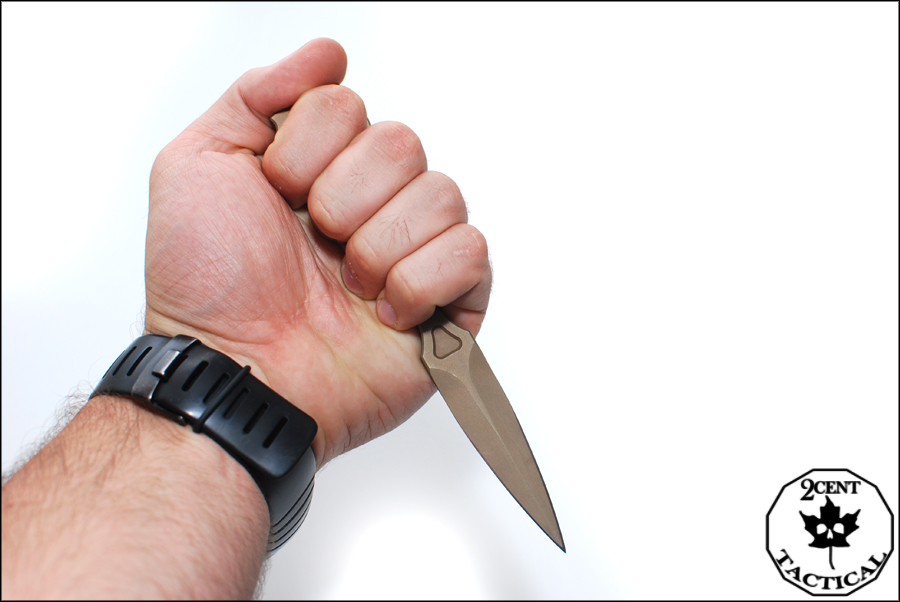 In the tip up position the knife is used in the hammer grip with your pinky through the ring. However if you decide to attach the knife in the tip up position you need to know something about kydex. Kydex is a thermo plastic that is formed by heat and a press. On the CQB Tool the retention of the knife is done by a dimple on the sheath sliding into a recess on the knife. Over time the kydex will wear away or deform due to heat. My sheath deformed a bit from both I suspect and didn’t lock in securely after awhile. My knife was not snug in the sheath and I feared losing it like my past neck knife. I used a heat gun and a piece of metal to push the dimpled area in on the sheath. It now has nice positive retention and it won’t go anywhere. The morale of this is you should avoid kydex sheaths in the tip up carry unless there is a secondary method of retention. 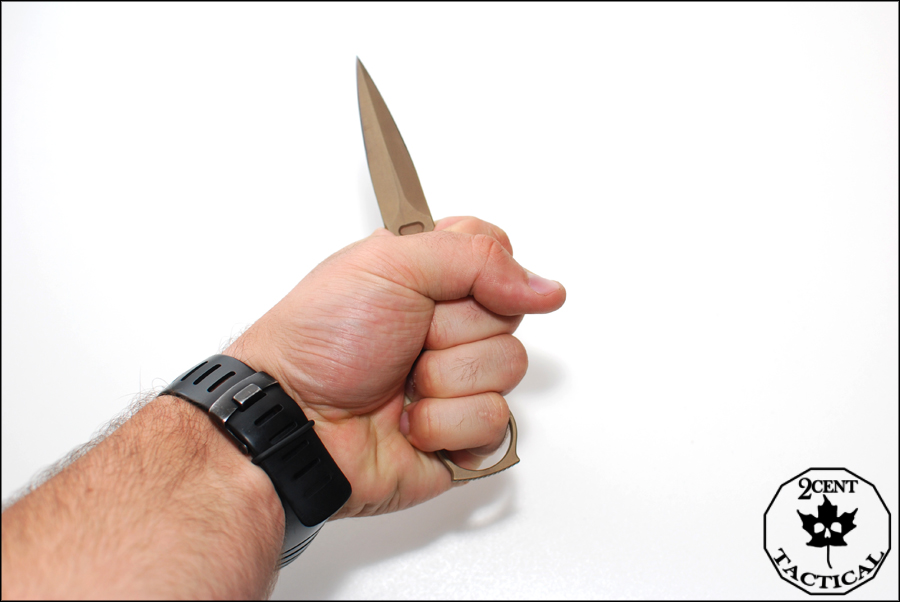 The third grip method of the knife is like a push dagger. This is done by gripping the ring of the knife in the palm of your hand with the handle and blade protruding by the left or right side of the middle finger. The rear of the ring has a raised slightly flattened section on it that will back against the hand comfortably. This section is also jimped I assume to help it keep centered in the hand when being used as a push dagger. 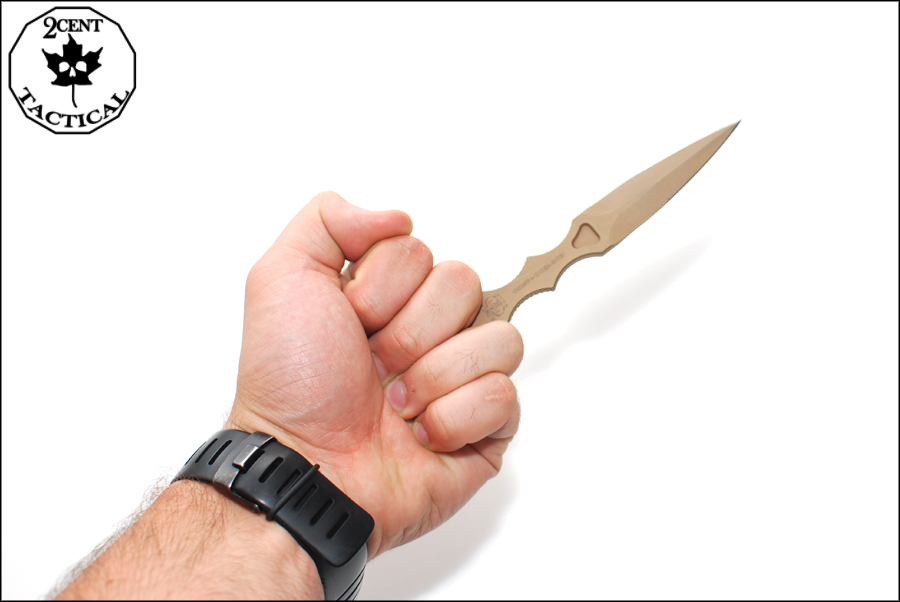 I talked about the sheath earlier in the review. The sheath is a simple kydex sheath made of two pieces of coyote brown or black kydex depending on what knife color you get. The pieces are held together with grommets. The grommets are used to tie the sheath to your rig, attach malice clips to, or loop cord through to use as a neck knife. I ended up attaching my sheath to the HSGI Taco with paracord because the Molle webbing on the pouch is not to spec and too narrow. This caused the clips to mash together. At first I thought this was due to the way the holes were drilled but after removing it from my pouch and attaching it to the belts Molle it was fine. The holes are drilled so that you have several ways to attach the sheath to your gear.

Conclusion
I really like this knife and it won’t replace my other cutting tools. It did replace my Strider Karambit however because I believe this knife to be easier to wield without training. I have never taken a knife fighting course and all the knowledge in this article are based on knowledge I have gained by reading and watching videos. I do plan to buy the trainer for this knife and undergo proper defensive knife training. If your buying this knife to be a slicer I would suggest you look elsewhere. However if you want a no nonsense fighting knife you should really check this one out. At $160 for the knife and $45 for the trainer you get a great combo made of good steel that won’t break the bank.