Having eaten more rations then anybody should happily consume I have come to several conclusions. The first of these conclusions is that whomever decides that the flavoured gruel within that silvery package is edible is an evil mean spirited person and the second is some meals just can’t be consumed easily with a spoon. I have had various sets of KFS’s (knife, fork and spoon) as well as sporks and most have left me unsatisfied. I have even jokingly brought chopsticks with me to the field on a challenge. Like most Fridays a few years ago I was looking through my Triple Aught Design email blast letting me know what had been released in store that week and saw this little gem. TAD had released a folding titanium spork that seemed to address most of my issues with the eating utensils that I had previously used. 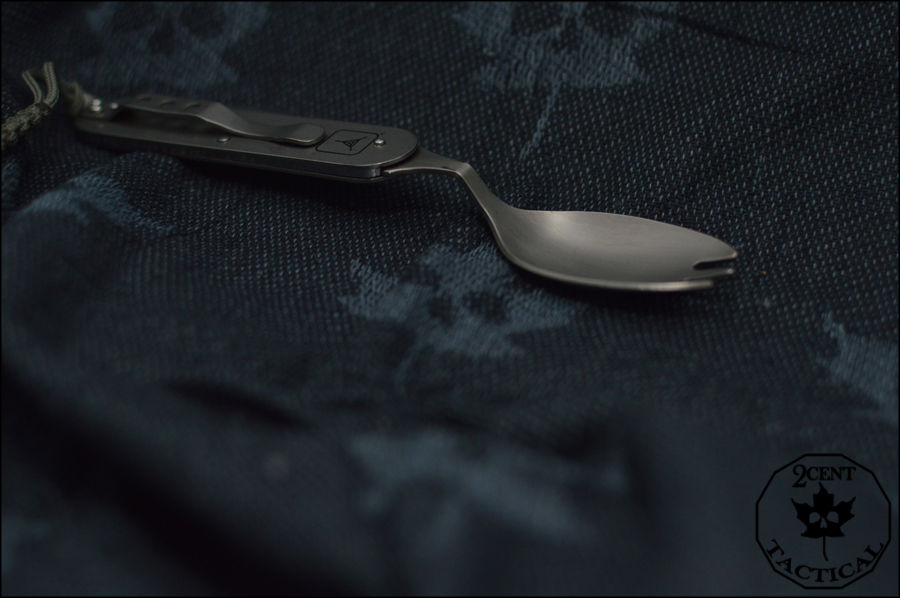 Con’s
-The spork cannot be disassembled for cleaning
-The spork does not lock in the open position
-The pocket clip doesn’t provide much tension
-The thumb notch on the bottle opener is on the wrong side.

Much like a multitool sporks are more often than not a compromise between being able to lift liquid or solid food to your mouth. The tines of the fork reduce the capacity of the spoons bowl to a point where it’s no longer useful as a spoon unless you’re eating a thick paste. Same can be said about the tines on the fork you don’t see many that are long enough to properly stab your meal and not end up dropping it on the ground while its en route to your mouth. The crew at Triple Aught Design are both outdoors people as well as innovators so I had no worries that the spork they were endorsing would be a well thought out utensil. 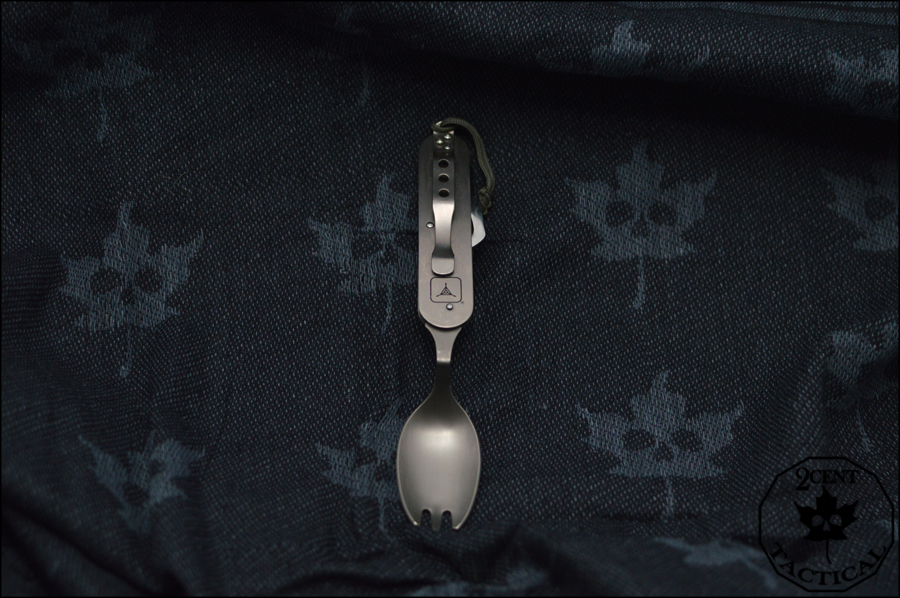 The TAD spork arrives to your house in a foam padded box that looks nice as a gift box if you happen to be sending it to someone who is deployed. The first thing that really caught my eye about the spork itself was how compact it was folded at 3 3/4″ long. Its small enough that it fits folded into the empty space within the cup for my Jet Boil system. The Spork has three main parts: the spork, body and bottle/can opener. 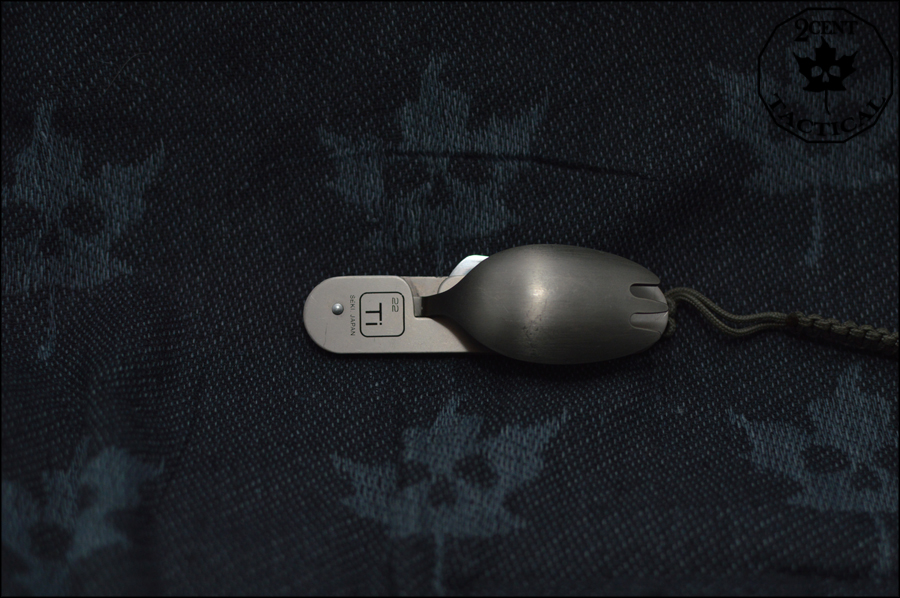 The spork along with the majority of the parts on the utensil is made of titanium. This yields a really low weight tool with excellent corrosion resistance. The other great thing about the use of titanium is it doesn’t leave a weird metallic taste in your mouth like some of the other ones I have used. I have ate a dozen issued rations with this spoon as well as an unhealthy amount of Mountain House and other comparable freeze dried meals with it. I even bring it with me when I pack a lunch at the office. Having used it for the last couple years I only have come up with two real issues. The first of those issues being that there is no way to disassemble the body to clean out the area in the pivot. Food tends to get caught up in there and I end up using alcohol swabs and a steam gun to make sure no bacteria hangs out in there. The last thing I need is to be in the field or camping and puking my guts up. I have been there done that and its nowhere near something I hope to revisit. My recommendation is to keep it away from uncooked meat and use something else to hold the meat while you cut it. The other issue is it doesn’t have a frame lock to lock it the spork in the open position. You end up having to be cognizant of which way you stir your meal so it doesn’t fold up on you. It’s not a major issue but something to take into consideration. 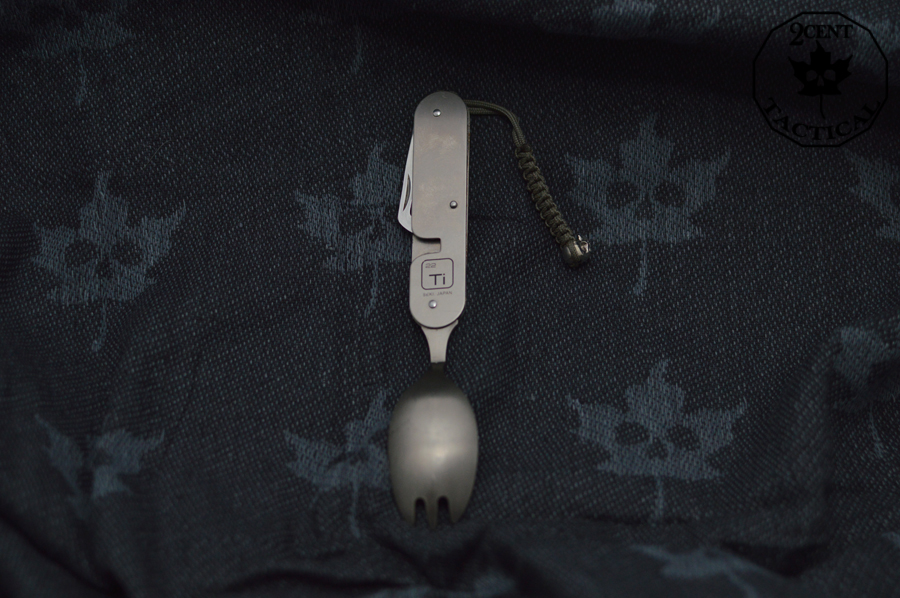 The body of the spork is made up of two rounded off rectangular sheets of titanium held by pressed in pins. The body sandwiches the spork and bottle opener as well as the slip joint that helps keep them both open. The slip joint and the bottle opener are made of stainless steel. One side has the periodic table of elements symbol for titanium as well as the place it was made in Seki city Japan. This side has the cut out that the spork rotates into when closed. The other side has the Triple Aught Design logo and the pocket clip. The pocket clip is nice and long allowing it to sit deep into the material that you happen to be clipping it to. The pocket clip doesn’t have a ton of tension unless you are clipping it to a thick material. If your plan was to clip it to your PALS webbing you might end up losing it. Your vest does make a great holding place for the spork while your preparing your meal though. 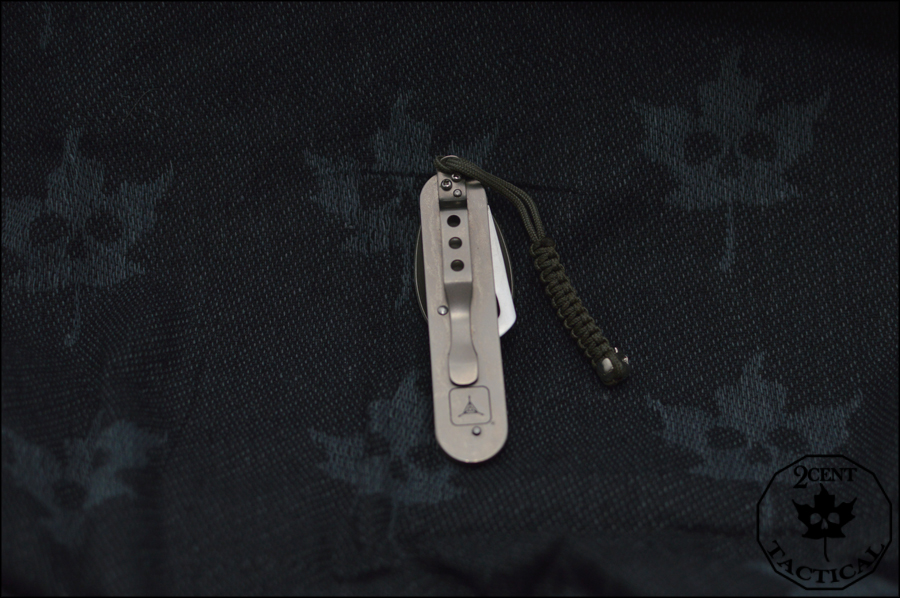 The last part of the spork is the bottle opener/can opener. Whether its opening a cold one after a day at the range or ripping into that can of Chef Boyardee you had hidden in the bottom of ruck this tool has got you covered. The bottle opener hooks on and rips off your bottle tops with ease. I found the can opener works as well as a can opener of this type can you’re just not getting into your can in a real hurry. The can opener doesn’t lock when its open so when your pulling it out of the can to move it forward a bit it tends to try and pivot back into the handle. While this may be a slow way to open a can it sure beats my old method of ramming a fixed blade through the top. Nothing is worse than spilling the contents of your soup can through the bottom that you accidentally punctured. The other issue is the thumb notch to open it is on the wrong side. The spoon covers the notch when its folded up. 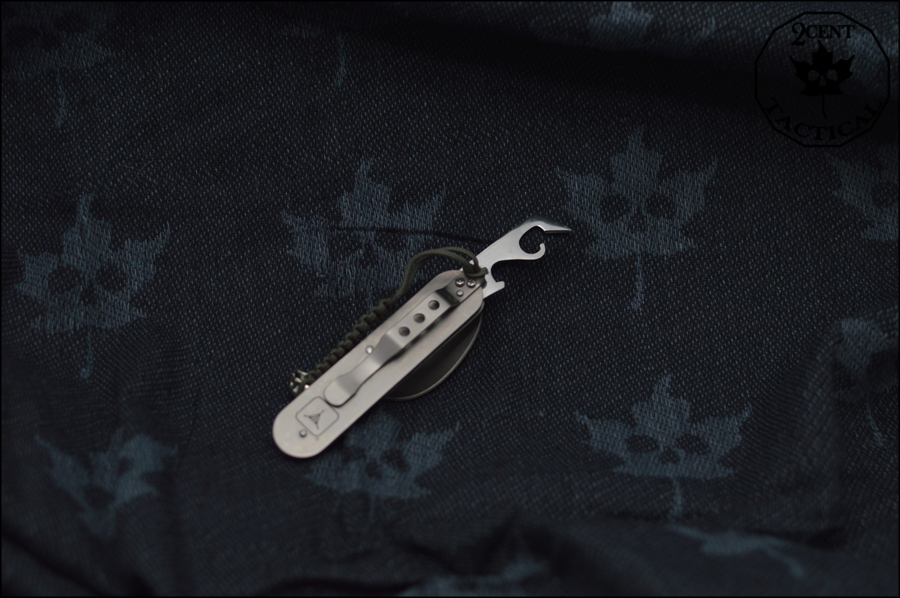 If you’re looking for a light weight eating utensil that won’t be a massive compromise of all the parts then the TAD spork is for you. Mine has seen many meals and shows no signs of being dropped from my stable of preferred field gear. The only issue is waiting for the yearly restock from TAD. This means you should sign up for their news letter that updates you on what’s new that week.