When it came time to put some iron sights onto my Remington 870 build with top rail, I looked at a ton of the different options out there. I knew I wanted nice and low sights that would work with the Vortex Razor reddot I put on the build and it turns out there aren’t many lower height BUIS’s out there so it made my job easier. 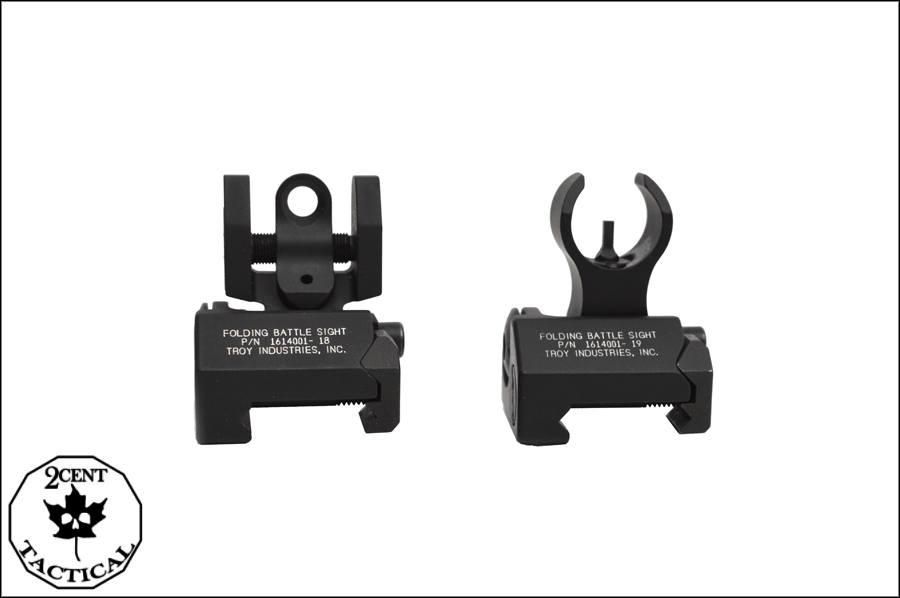 The Troy Micro BattleSights are designed for rifles where the top rail is higher over the bore then a standard AR or for weapons platforms that would have a chinweld instead of a cheekweld due to the low position of the stock in relation to the top of the receiver. Since there are two sights I will talk about each one individually and then my experience using them while shooting. 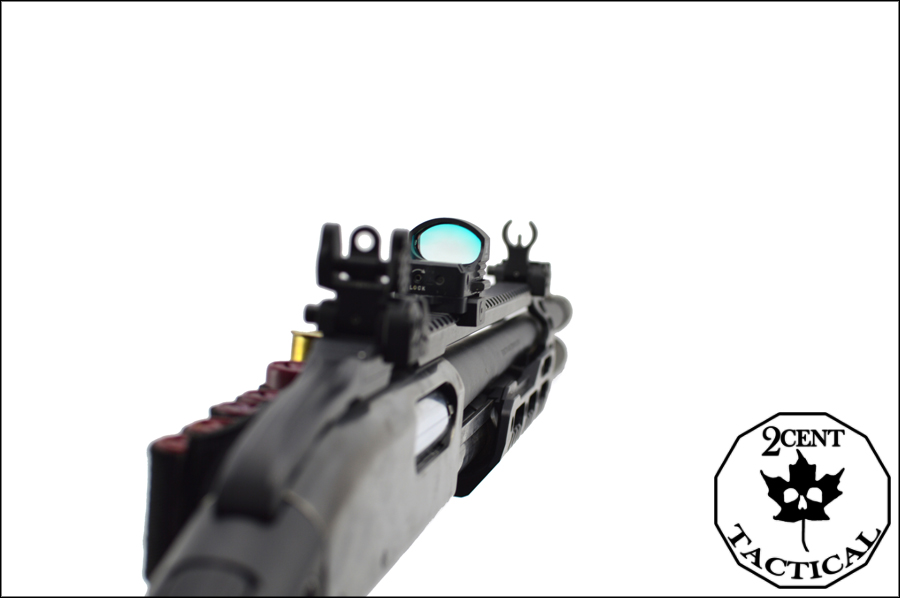 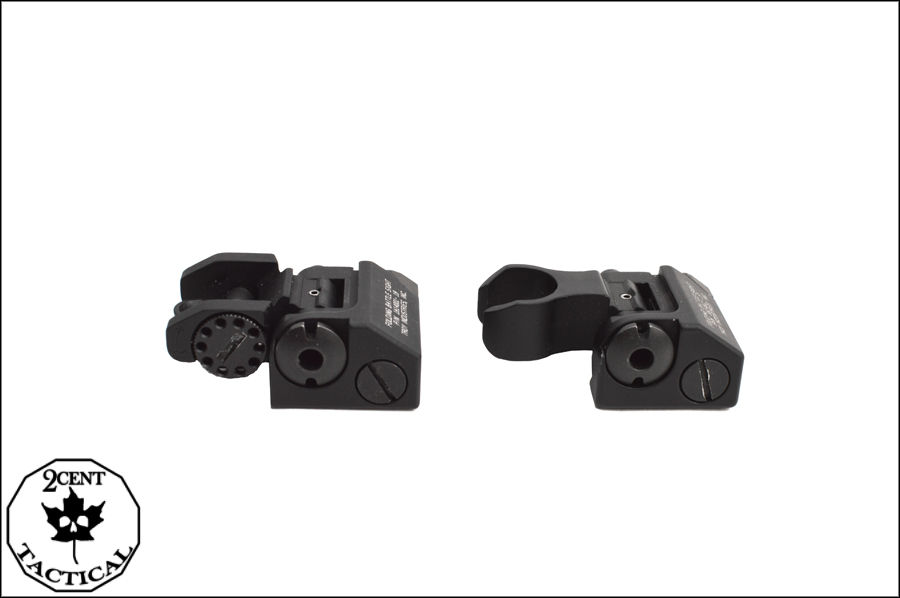 The front post is adjusted using the standard AR front sight adjustment tool, though in my case this was done using the Multitasker magnetic front sight adjustment tool. The front sight post has quarter turn adjustment clicks making it easy to dial in. The front and rear sights lock into position with a spring loaded cam that snaps the lock down onto two steel posts. The two points of contact on the lock provide a secure and dependable lock when deployed. To release either sight a button protrudes out the left side of the sight and is pressed in while pulling back on the sight. 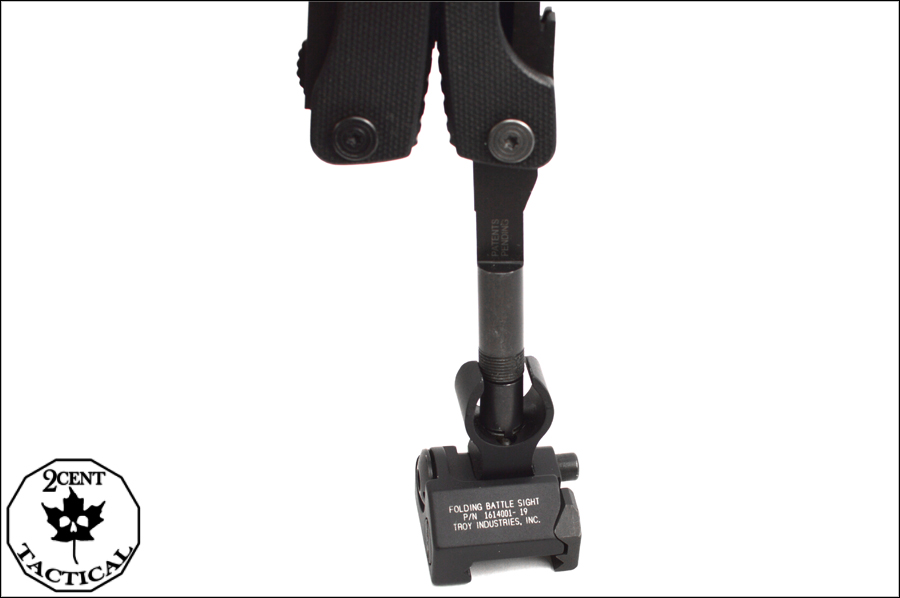 The Troy Micro HK BattleSight rear has two vertical wings protecting the aperture, the right of which has the dial used in adjusting the aperture left or right. The adjustment dial can be operated with a coin or common screw driver. The dial has ten holes in it that a ball bearing clicks into with a quiet but audible click. I was happy to see that the rear of the sight had markings for returning to zero and reference marks. These marks can only be used when the larger of the two apertures is in use. Just like the front sight, the rear snaps into a vertical position securely and requires the press of a button to flip it back down.

I believe shooting with iron sights is an important skill,though I don’t profess to be the best at this, and some work a lot better with me then others. In this case I found the front sight very similar to what is on my VZ58, however, the rear was much easier to use in conjunction with the front sight. I found the rounded wings on the front sight extremely fast to line up with the large hole in the rear aperture. I was able to accurately snap onto target faster than I have previously with any other irons that I have had the chance to use. Due to the distance, the sight was mounted away from my face the front post had to be centered in the smaller aperture. This wasn’t much of a problem, however it was a bit slower while sending slugs further down range than buckshot would reach accurately. 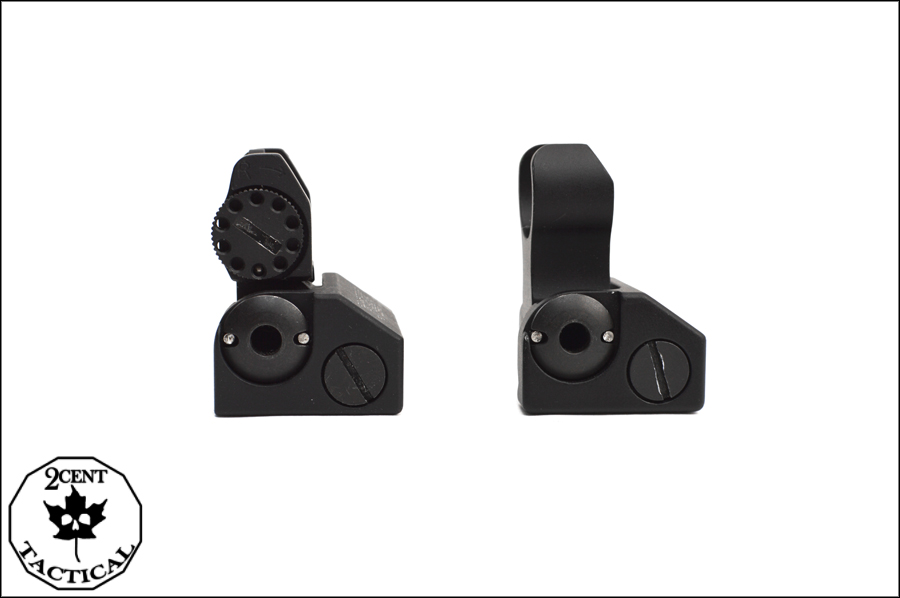 Outside of being attached to my Remington 870 these also spent a month on a friend’s .308 AR who I had gotten to shoot several boxes of supplied ammunition through it. With each shot he was to shoot a round, flip the sights down, and then flip them back up. We were doing this to see how multiple deployments would affect return to POI. One box was used as a control and four, five round groups were fired to see what the results with the sights left deployed would be. After that the remaining eighty rounds were fired with the sights being cycled each time and then the results were compared to the control. There was no discernible shift in POI and grouping size at 100m.

If you plan to mount these irons on a rifle with a higher top rail then normal like the Robinson Armament XCR or in this case a Remington 870 with full top rail kit, or getting the standard height HK BattleSights for a normal rifle, I don’t think you can go wrong. I found adjusting the sights with slugs and the .308 AR to be easy and straight forward, target acquisition was faster than I am used to with irons, and the price of $199 USD isn’t all that bad either. Troy has built a sturdy sight capable of taking a beating and when I finally get around to building an AR I plan on getting the standard height ones for it.

Firearms and Accessories Optics/Sights No Comments